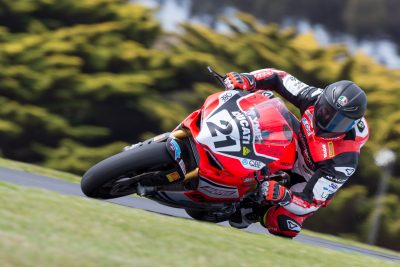 The Yamaha Motor Finance Australian Superbike Championship presented by Motul Pirelli (ASBK) is pleased to welcome United Kingdom broadcast partner Eurosport to the 2018 championship. Eurosport is one of the leading sports channels throughout the world and shows the strength and recognition of the ASBK Championship overseas.

ASBK in 2018 is seeing one of the most thrilling and action-packed seasons in recent times. With talent and big names such as World Superbike legend Troy Bayliss (Desmosport Ducati, 1299 Panigale FE) and former BSB competitor Josh Waters (Team Suzuki ECSTAR, GSX-R1000R) it’s no surprise to see the interest from the UK.

Eurosport will televise every round of ASBK in the motorsport loving region of the UK and their fans won’t want to miss the best motorcycle racing Australia has to offer. Viewers will also be able to catch the action anytime with on-demand via Eurosport Player.

The first broadcast of ASBK Round 3 The Bend Motorsport Park on Eurosport will be aired at 19:00 CET on the 6th of May.

The international coverage doesn’t stop there, as ASBK is also pleased to announce that the telecast will air on Fox Sports Asia. Fans from the greater Asian region will be able to catch every thrilling moment of the remaining rounds. Check your Fox Sports Asia guides for telecast times.

Motorcycling Australia’s CEO Peter Doyle sharing; “We are very pleased to see ASBK being broadcast on international television with our new broadcast partners. This highlights the phenomenal growth of the championship and we hope to maintain this significant momentum. Fans from around the world more than ever have multiple ways to catch up with the action.”

For more information on Eurosport head to www.eurosport.co.uk