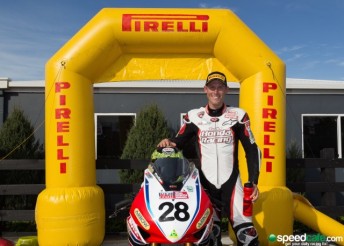 Pirelli and Motul will join the Australian Superbike Championship as partners

MEDIA RELEASE: Motorcycling Australia (MA), and the Australian Superbike Championship (ASBK) are pleased to announce the renewed partnership with LINK International, today confirming Motul and Pirelli as the official ASBK presenting partners for 2016.

As leading brands, Motul Oils and Pirelli Tyres have a long history in supporting many aspects of motorcycle sport and partner with ASBK once again in 2016, solidifying the continuing strength of Australia’s premier road racing championship, the ASBK.

“Here at Link International, it was an easy choice to continue to support the ASBK in 2016. The ASBK is a strong program for sponsors, and we are thrilled to be a part of the championship in 2016,” he said.

“It was exciting to see the development of the series throughout last year, and it’s an honour to once again have Motul and Pirelli as presenting partners for the series in 2016.

“Motul and Pirelli are both highly advanced, internationally recognised products, and here at Link International, we believe in joining forces with the best in the business, so the ASBK was the clear choice.”

Motorcycling Australia CEO David Cottee also shared his enthusiasm in having Motul and Pirelli on board as presenting partners for the 2016 ASBK.

“It’s fantastic to have such quality brands supporting the series again,” he said.

“It’s especially important that we have two brands who support many motorcycle disciplines and who put into the sport the research and technology to create great products.

“We are thrilled for another great year full of competitive racing and it’s exciting to lead into Round 1 of the ASBK series for 2016, with the support of our presenting partners.”

Motul motor oil is a French based high-tech engine lubricant, pioneering the first lubricant formulation of 100% synthetic for automotive engines. Motul support some of the biggest sporting events in motorsport and is continuing to work with racing teams and manufactures to further develop technology in motorsport.

Pirelli motorcycle tyres are company devoted to developing the best and most technologically advanced tyres for all clients, encompassing top international teams to small privateer teams.

For all information regards the ASBK 2016 championship please head to www.asbk.com.au or www.ma.org.au