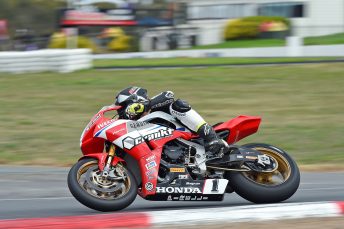 Defending champion Herfoss was fastest on Friday and qualified second on Saturday aboard his CBR1000RR SP, before going on to finish with 4-2 results in the pair of 16-lap races.

Herfoss led the opening 11 laps in both races today, albeit missing out on the victory, but has closed to within nine points of the championship lead – currently tied for second with round winner Wayne Maxwell.

Teammate Bryan Staring overcame a challenging beginning to the round to qualify in sixth place, then register 8-7 finishes for seventh overall. He has maintained fifth in the championship standings.

The 2017 ASBK series will now take a two-month break before returning to action at Hidden Valley Raceway in the Northern Territory on 7-9 July.