ASBK back live on your screens, with SBS and Fox Sports

ASBK back live on your screens, with SBS and Fox Sports 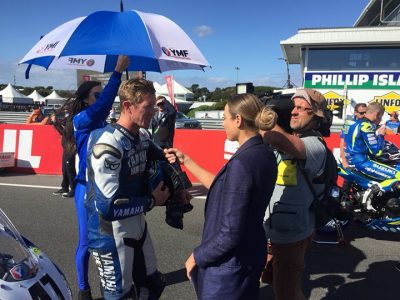 The announcement fans have been waiting for is here, the Yamaha Motor Finance Australian Superbike Championship presented by Motul Pirelli (ASBK) will be racing onto a screen near you. The thrilling ASBK Championship will continue to be broadcasted live and free in HD to fans via SBS for two hours. After four years of hosting ASBK as a post production show, Fox Sports have stepped up their coverage to bring fans up to four hours of live action, in 2018. For the hardcore fans, livestream on ASBK.com.au will keep you up to speed, with full race day coverage.

The live ASBK action will be broadcast on every Sunday race day and will kick-off from Round 2, to be held at Wakefield Park Raceway on March 18.

For those who missed all the action trackside from ASBK Round 1, there will be a post production show available on Sunday March 10, on SBS from 1pm-3pm.

SBS have bolstered ASBK live to a significant mainstream audience and this television partnership will continue into the 2018 season.

Stuart Randall – Executive Producer SBS Sport is thrilled to be a broadcast partner of ASBK sharing; “We are thrilled to once again be part of the ASBK, and provide live viewing opportunities to our audiences on SBS HD and SBS On Demand of a very exciting sport. The ASBK came along in leaps and bounds with last year’s live TV broadcast providing a huge boost to the competition. SBS has long been a great supporter of motorsports both domestically and internationally and we’re delighted to work with AVE to continue the growth of the ASBK.”

ASBK is very pleased that Fox Sports ‘the home of live sport’ for Australia has once again committed to ASBK for a fourth consecutive season, and in 2018 its set to get bigger and better. For the first time in the four-year partnership, ASBK will be brought to fans live for up to four hours. Don’t stress if you can’t catch the action live, as Fox Sports will be broadcasting a replay for every round.

Set to be livestreamed for eight hours on race day, ASBK Live will cover the YMI Superbikes, Kawasaki Supersport, Australian Supersport 300, YMF R3 Cup, F1 and F2 Sidecars and the GP Juniors Cup. You can catch the action from anywhere with the racing coming to you live on your computer, phone and tablet. If you miss the action on the day, a replay is available on demand at ASBK.com.au and on ASBK Facebook.

ASBK is very excited to have AVE on board as the TV production partner for a second year ahead of the huge 2018 race season. AVE have a long history of producing quality television for Australian Motorsport, and are a great partner to ASBK.

ASBK will be taking it to the next level, with the broadcast set to reach Europe, United Kingdom, United States of America and Asia as the championship captures global attention and audiences.

Motorcycling Australia’s CEO, Peter Doyle added; “We are excited to announce both SBS and Fox Sports as live television broadcast partners for the 2018 season. ASBK has gone from strength to strength, as the popularity of the ASBK now shows. Over a long period, we have all worked hard together to shape the ASBK into the brand we all envisaged it could be.

“We have seen encouraging sponsorship commitments, plus incredible team support for the ASBK. The opportunity to showcase our strong talent pool by televising the ASBK via SBS, Fox Sports and livestream is sure to satisfy ASBK’s fans for plenty of racing action,” Doyle concluded.

Stay tuned for more information about exact times for television coverage and livestream.