Armstrong takes on the world this weekend

Armstrong takes on the world this weekend 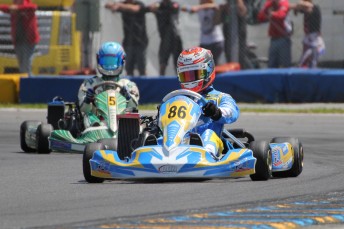 Christchurch karter Marcus Armstrong takes the next – big – step in his four-wheel career this weekend at the World Karting Championship meeting at Essay in north-western France.

The 14-year-old was invited by the Kosmic team to compete in the KF Junior class at this year’s world championship meeting, a first for a New Zealand driver, and the first time a Kiwi has competed at the annual World Karting Championship event since the Cunningham brothers Wade and Mitch, Wade winning the Senior title at Sarno in Italy in 2003.

This weekend he is one of 170 drivers from 34 countries chasing a world title with close to 100 in the KF Junior class alone and is well aware of the task ahead of him.

“As always, I aim high, but anything can happen, particularly at a one-off race for the World Championship.”

Getting used to the extra power and in particular grip of a KF Junior class kart is the biggest difference Armstrong has faced so far but as he said of the Germany championship meeting; ‘ it took me a few sessions to adjust to the grip level which was completely different to anything I had done before, but I improved throughout the weekend and finished fourth out of 45 against a lot of the big names/race favourites for the worlds.”

In the KF Senior class the drivers expected to vie for the 2014 world title are Callum Illot (Zanardi-Parilla-Dunlop) from Great Britain, Nicklas Nielsen (Kosmic-Vortex-Dunlop) from Denmark, and Pole Karol Basz (Tony Kart-Vortex-Dunlop).