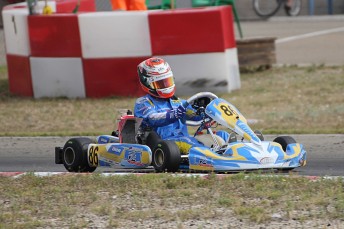 It was an impressive performance from the just-turned 14-year-old from Christchurch, who got the call-up from Italy’s Kosmic factory on the strength of heat race wins in the European Rotax Max Challenge series which he has been contesting this year.

Over 80 of the world’s top Junior karters entered this year’s World Karting Championship meeting at Essay in north-western France and Armstrong found he had his work cut out after ending up 51st in the pecking order after the timed practice sessions on Friday.

An 11th and two 10th place finishes in his three qualifying heats saw him up to 27th and he was 13th quickest in the warm-up for his Pre-Final (there were two to trim the field down for the Final) and 17th in the race itself.

That put him on P33 for the Final from where he made up 11 places to greet the flag in 22nd place.

” I was looking to improve after qualifying which I did, and though we had the potential to challenge higher I’m still happy with 22nd,” Armstrong, the reigning New Zealand Rotax Junior class sprint champion, said from Essay early this morning (NZ time).

“I’d like to say a big thank you very much to everyone at Kosmic and my family and yes this definitely makes me hungry for more.”