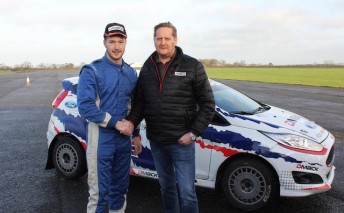 The 21-year-old is rewarded with a funded prize drive in next year’s Drive DMACK Fiesta Trophy which takes place over five FIA World Rally Championship rallies. He will drive an M-Sport-prepared Ford Fiesta R2T.

The Vatanen Touch was created to allow private drivers to compete alongside the Drive DMACK Fiesta Trophy regulars on individual events – providing an opportunity to gain experience of world rallies and assess their pace against the Trophy contenders.

One driver was nominated from each round along with competitors from the main Trophy who contested all five events.

Armstrong was selected as a finalist after a stunning performance on Rally Spain, where he set a series of solid times on his world rally debut.

The competition was intense but after a series of interviews with DMACK and M-Sport representatives, who quizzed drivers on their personal development and competition plans for the future, Armstrong edged through to become the winner of the inaugural Vatanen Touch award.

Jon Armstrong said: “Winning this prize means the world to me. It’s a great opportunity for me to step up to the Drive DMACK Fiesta Trophy next season and really make the most of it. Competing on Spain this year was fantastic and I’m really looking forward to more WRC events and proving to DMACK and M-Sport that they made the right choice.”

Malcolm Wilson OBE, M-Sport managing director, said: “I was really impressed with the quality and dedication of all the finalists and it demonstrates how eager our Fiesta drivers are to progress their careers. However, Jon shone through and I’m confident he will make the most of this excellent opportunity in next season’s Drive DMACK Fiesta Trophy.”

Dick Cormack, DMACK managing director, said: “The success of the Drive DMACK Fiesta Trophy has surpassed our expectations again this year and the Vatanen Touch is another way for us to reward private drivers and competitors who have supported our series. Jon has really impressed us today and we are looking forward to giving him our full support as he steps up to WRC action next season.”