Armstrong to call Europe home in 2015

Armstrong to call Europe home in 2015 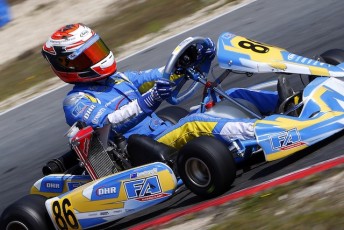 Young Christchurch-based driver, Marcus Armstrong, is packing his bags for a long term stay in Europe after securing a spot on the Tony Kart Racing karting team from Italy.

Already an accomplished racer in karting, Formula Ford and Toyota’s TR-86 series and holding no less than five national kart championships, as well as success in high-profile kart championships in Japan, USA and Europe, Marcus has amassed significant race mileage.

However, this will represent the 14 year-old’s first full-season drive in the senior grade KF championship.

With Marcus competing in all rounds of the CIK-FIA and WSK championships as part of what is widely regarded the world’s leading factory kart team, and with access to expert European driver training programmes, this is the opportunity Marcus and his father, Rick, have been working toward.

“This is a new approach to breaking into the European motorsport scene for drivers on this side of the world.” Says Rick Armstrong.

“Rather than approaching teams later in his career, Marcus is basing himself in Europe early, it’s really the first time a Kiwi is making such a commitment to European karting, but that is unquestionably the breeding ground for the world’s best drivers and we think it will open doors for Marcus as his career progresses.”

Based in the UK, but racing across the continent and with mentorship by former world karting champion, Oliver Oakes, Marcus will also be incorporating cutting edge simulator training into his busy regime and testing in Formula 4 with an eye to contest the F4 series in Australia later this year as it aligns perfectly with his Northern Hemisphere race calendar.

All the while Marcus will be keeping up with academic commitments via correspondence back to New Zealand.

“It’s definitely going to be a bit of work,” admits Marcus, “but this is the career I wish to forge for myself and I’m fortunate to have this opportunity, it’s absolutely worth working hard for”

Marcus will contest the Ruapuna round of TR-86 this weekend before heading to La Conca, Italy ahead of Round 1 of the WSK Champion’s Cup.