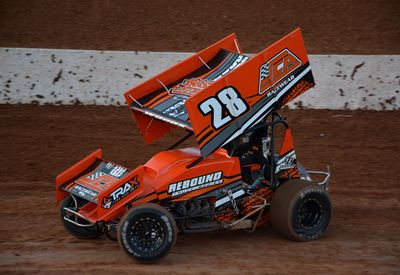 Fans of open wheel racing have more than 100 reasons to make Archerfield Speedway their destination of choice this Saturday night (November 14) when round two of the East Coast Logistics Sprintcar Track Championship headlines a huge night of dirt track open wheel action. The show will also feature round three of the TFH Midget Series and round two of the Done Right Paint Worx Formula 500 Series, along with club championship rounds for Wingless Sprints and Lightning Sprints and the biggest field ever of Formula 500 Juniors. In fact, the pits will be bursting with more than 100 competitors, including several from interstate who, in light of the fact that racing is yet to resume southern regions, are heading north to satiate their competition cravings.

The Sprintcar action will see Lachlan McHugh and Luke Oldfield resume the battle for supremacy that saw them dominate the opening shows of the season. In fact, so far this season, McHugh is yet to lose a feature race that he has finished, winning four in a row before crashing out of the opening ECL round here on October 17, while Oldfield, quite remarkably after five nights of racing, is yet to finish in any other position other than second place. Yep, Oldfield has filled the runner-up position in every feature race staged so far this season, having been upstaged by McHugh on four occasions before finishing behind Cody Maroske at the most recent event. Whilst he has demonstrated a remarkable record of consistency that is impressive by any measure, Oldfield is no doubt frustrated at having come so close without breaking through for a win and this Saturday night he will have to fend off the best efforts of McHugh, Maroske and 25 other drivers if he is to make his way to victory lane.

Whilst Oldfield, McHugh and Maroske have been the standouts thus far, there are plenty of others in the field capable of upstaging this trio and, with teams having being blessed with an extended break as a result of inclement weather, no doubt much time was spent reviewing, reflecting, tuning and tweaking in the endless quest for a performance advantage. After a slow start to the season, defending track titleholder Aaron Kelly enjoyed a timely return to form in the championship opener, finishing on the podium to start his championship defence in strong fashion, while the likes of Callum Walker, Brent Kratzmann and former Queensland champion Mitchell Gee are consistent front runners and are expected to feature prominently in the action once again. Adam Butler has also established himself as genuine threat, while the collective experience of Allan Woods and Darren Jensen should hold them in good stead should they find themselves in the mix come feature race time.

Round two of the Petzyo Sprintcar Development Series will also be contested on Saturday night, with former Wingless Sprint standout Brant Chandler looking to follow up his excellent debut outing with another dominant display.

Round three of the TFH Midget Series has attracted one of the biggest fields we have seen in recent seasons with 22 drivers nominated to take part, including the only two feature race winners for the season thus far in Brad Dawson and Rusty Whittaker. The first two rounds of racing in the TFH championship were staged over consecutive nights on October 3 and 4 before round three scheduled for October 31 fell victim to inclement weather. Dawson sprung an upset to score his maiden feature race win in taking out the opening round before Whittaker bounced back to win round two. Joining them in action this weekend will be a posse of pacey rivals seeking to plot a passage to the podium. Both Dawson and Whittaker return this weekend to face off against the likes of Darren Vine, Charlie Brown, Anthony Chaffey Scott Doyle, Cal Whatmore, teenage gun Bodie Smith and a couple of New South Wales-based visitors in Dean Meadows and Jordan Mackay. Having embarrassed his more experienced rivals in round two with a blistering heat race performance that saw him round up the field with a superb outside run before backing up to finish second behind Whittaker in the feature race, Lachlan Paulger will certainly be another worth watching.

If the results in local Formula 500 competition so far this season can tell us anything, the most obvious reading would be that four-time national champion Liam Williams has, like Austin Powers before him, lost his mojo.. Certainly the winning form that carried him to countless feature race victories in seasons past has thus far deserted him since racing resumed in the wake of an extended off-season, although there is no doubt he remains the benchmark driver in the field. Once such loss came in the opening round of the Done Right Paint Worx Series in which Williams, having led the event early, botched a restart that resulted in him becoming entangled with James Kennedy. As his fiancé Kristin Brown raced away to win ahead of Tarhlea Apelt in a 1-2 finish for the two female competitors that might just be the first such result of its kind, Williams could do no better than fourth place. Brown and Apelt will certainly be hoping they can do it again this weekend, with Kennedy, Brady Argles and Ryan Newton also presenting as potential threats.

Despite the absence of a few regulars, Wingless Sprints have still mustered a solid 17-car field for round three of their Club Championship Series, with a swathe of newcomers taking on experienced hands such as Paul Robinson, Ryan Harris and Cody O’Connell.

A dozen Lightning Sprints will hit the track for round two of the Stockmans Civil and Plant Club Championship, including round one winner Michael Gollagher, current Queensland champion Jason Rae and former state titleholder Keith Blatch.

Not surprisingly, there are some familiar surnames amongst the Formula 500 Junior nominations as these next generation stars follow in the footsteps of those who have gone before them, taking on fellow youngsters looking to start their own legacy of success.

Gates open at 1.00pm for competitors and online ticket holders only, with general admission ticket sales and entry from 3.00pm. Early racing will hit the track from 5.00pm and the main program will get underway from 6.00pm.