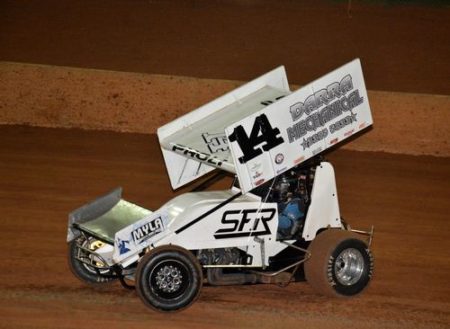 Race fans, the wait is over! The moment of truth has arrived with the 2021/2022 Queensland speedway season to launch in spectacular fashion at Archerfield Speedway this Saturday night (October 2). Featuring the opening rounds of both the East Coast Logistics Spintcar Track Championship and TFH Midget Series, along with Monster Trucks, Fireworks and a huge support program, the night promises to deliver a feast of dirt track derring-do from some of the very best in the business. Also on the exclusively open-wheel program will be Wingless Sprints and Formula 500s, with both categories typically serving up action aplenty on the Archerfield oval.

The Archerfield circuit is undeniably the home of speedway in Queensland, with more shows, more competitors and more events than any other venue in the state and the 2021/2022 schedule shaping as yet another blockbuster season. The schedule includes numerous championships, series events and blue ribbon fixtures for a myriad of race categories, with the full season calendar available on the track website.

Defending ECL track champion Lachlan McHugh heads the Sprintcar entry list for Saturday night, fresh from a successful outing in Toowoomba two weekends ago. On the back of some strong results in Darwin a month or so earlier, McHugh wrapped up his pre-season preparations in the best possible way with a feature race win in Toowoomba and, having also completed a stint racing in America that included some impressive performances, the Gold Coast gun has already put his rivals on notice that they will need to lift their game if they intend to contend for the championship. In fact, the Toowoomba results suggest that, despite months of planning and preparation through the off-season, perhaps very little has changed in terms of the established pecking order as Cody Maroske and Aaron Kelly, who filled the minor placings in the club championship standings last season, again proved McHugh’s biggest threats in the pre-season showdown.

Whilst a series of setbacks ultimately resulted in an early finish to the 2020/2021 season for Luke Oldfield, he still proved the biggest threat to McHugh every time he hit the track despite being unable to snag a feature race win. In fact, his nine podium results in ECL competition were more than anybody else other than the championship winner. The former track titleholder, who also hails from the Gold Coast, has no doubt used the off-season productively to refresh, regroup and refine a strategy that will see him re-establish himself as a regular visitor to victory lane. Of course, with 30+ nominations, there are certainly plenty of others in the field who would fancy their chances, including the likes of Kevin Titman, Bryan Mann, Brent Kratzmann, Randy Morgan and Ryan McNamara. Titman and Kratzmann have been regular front runners for several seasons now and both finished inside the top six in the series standings last season, while Mann only made two appearances last season but is no stranger to victory lane and remains the only local driver to have won the prestigious Australian Open. McNamara, meanwhile, twice found himself on the cusp of a breakthrough feature race win towards the end of last season, only to fall victim to the actions of others on both occasions. Having been denied his place in the history books, McNamara will be desperate to correct the record as soon as he possibly can.

Others bringing strong form from Toowoomba into this weekend include Karl Hoffmans, who clocked the fastest lap in time trial qualifying in his return to racing, and Ryan Newton, whose fourth-place finish was his best result since stepping up from the Formula 500 ranks midway through last season, while a top-five result from Mark Pholi suggests he might have finally cast aside the misfortunes that have plagued him in recent times.

The Midget brigade are obviously very keen to hit the track, with the strongest opening night field for several seasons having been secured for the TFH Series opener. Expat Kiwi Michael Kendall returns aboard the Ian Boettcher Race Parts #35, taking on 20 others in a field that includes several runners with feature-winning experience. Brock Dean, Darren Vine, Brad Dawson and Rusty Whittaker are certainly amongst this group, although the latter will most likely be happy just to complete the race meeting without incident. Having been plagued by mechanical failures last season that prevented him from making any real impression, Whittaker is back in his own car this season and will relish any opportunity to mix it with the front runners once again. Add the always-exciting Charlie Brown into the mix, along with the big improvers of last season in Cal Whatmore and Mitchell Rooke, plus Nathan Mathers and a returning Scott Farmer, and there are plenty of possible combinations that could ultimately fill the podium.

As one of the consistently most impressive categories last season with regard to the number of competitors at each event, Wingless Sprints have maintained that momentum into the new season. Despite the fact that border closures have prevented drivers from Lismore and northern New South Wales from taking part, a 19-car field will gather for the opening round of their 2021/2022 Club Championship presented by Ozsports Trophies and Apparel, with category regulars such as Lachlan Robertson, Liam Atkinson, Tim Harris and Jayden O’Toole amongst the entries.

Formula 500s, on the other hand, have been a bit slower out of the blocks and will have a 12-car field on track, including former state champ Kaydon Iverson from Townsville, who comes fresh from success in the Marlin City Classic in Cairns. Particularly pleasing is the fact that four of the nominated competitors are recent graduates from the Junior F500 program now looking to make their mark in the senior ranks.

Gates open at 3.00pm for online ticketholders, with early racing from 4.30pm and the main program from 5.45pm. Monster Tracks will make multiple appearances throughout the night and Fireworks will light up the sky just prior to the interval break. For those unable to purchase tickets online, the ticket box will open from 4.00pm