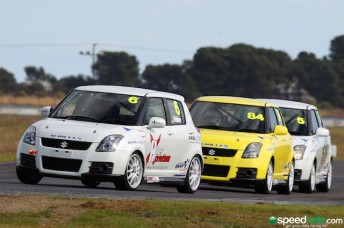 MEDIA RELEASE: The Australian Production Car Series is pleased to announce the introduction of an ‘arrive and drive’ Suzuki Swift program in conjunction with GMC Motorsport Services.The cars will be eligible to run in Class E as part of the four-round 2016 APCS Series.

Category manager Iain Sherrin says with the addition of the Swift Sports and other car makes coming into the series the move could see as many as fifteen APCS Class E cars on the grid in 2016.

A fully-prepared Swift Sport can be leased from just $7,000 per round, complete with four new Series control tyres, vehicle transport, vehicle management, mechanical services and race support from GMC staff, round entry fees, garaging, fuel and timing on-track, logistical support, and use of GMC resources during events.

“With all rounds of the APCS requiring at least two drivers, and discounts also available to those who commit to all 2016 APCS rounds, this represents an affordable entry-level package into what is a national racing platform,” said Sherrin.

Category manager Iain Sherrin expects as many as 15 APCS Class E cars on the grid this year, thanks to the addition of the Swift Sports and other car makes. pic: GMC Motorsport Services

“Each of our four events in 2016 offer at least four hours of racing at some of the best race tracks in the country – for those looking to race on the national stage, to get signatures on their licence, or to start their racing career where many of today’s greats did, this is a fantastic chance to get in and get going without a huge financial outlay in a speedy and well-prepared car.

“At the longer events, you can run up to three drivers in your car, providing the opportunity for you to share the cost even further and make this opportunity even more affordable – it really does deliver a bang for your buck that isn’t that often available within the Australian motorsport industry.

“Not only is there value for money, but the opportunities for young racers in the APCS are huge – you can start your career here, race against legends of production car racing, progress up the class ranks, and use it as a base to develop from and work your way up the racing ladder into other categories.

“Many people don’t realise just how many of Australia’s racing names have been hosted over the years by production car racing.

“From legends like John Bowe, Mal Rose and Glenn Seton to identities like Dean Fiore, David Russell and Craig Baird, production car racing has been a happy home for many a well-known racing driver.

“The young up and comers have found a home with us as well – for instance, Chaz Mostert raced a BMW335i in 2011 and 2012 and even took home a race win in Sydney all while he was cutting his teeth in the Development Series; and also Aaron Seton, who moved up to driving in the Porsche GT3 Cup after a year in a Mitsubishi Evo.

“For them and countless others, production car racing has been a valuable starting or learning point in their career, and now it is more affordable than ever.”

To register your interest in the available packages, please contact Greg Cox on 0402 406 708 or [email protected] for full details.