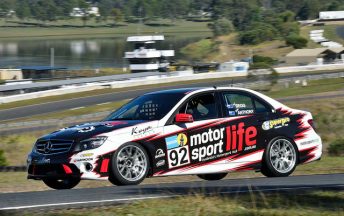 BM Racing is set to introduce the first Mercedes-Benz C63 AMG to the Australian Production Cars category this weekend during round four of the APC 2017 season – being held at Queensland Raceway across August 4-6.

The 2008 MotorsportLife.com.au-sponsored Mercedes-Benz C63 AMG has a 6.3L V8 and will be contested by BM Racing Development’s Justin Anthony and Karl Begg in the A2 Class at this weekend’s event.

Round Four will comprise of two 300km races including the infamous ‘Fight in the Night’ on Saturday evening, and Anthony says the car is ready to go after being purchased only eight weeks ago.

“As far as we could see, no one had done one of these cars before and we always like to push the boundaries when developing a new race car,” explained Anthony, whose team is supported on-track by not only MotorsportLife.com.au but also Sommer Car Care, Koya Wheels Australia, Liqui Moly and Super Pro Suspensions.

“We’ve always had BMWs and it has been very refreshing to build this new car.

“The preparation for this weekend has been hectic to say the least – we have been preparing two other vehicles from our workshop and there has been a few early starts and late nights with the AMG as we got it ready for its unveiling.

“As part of that preparation, the car has had three test outings – it is still early days and this weekend will see us using the time to test the car in race conditions. Even so, we want to push forward throughout the weekend and hopefully come out the other end with a good result.”

While this weekend will be the debut for the car in the APC, and indeed anywhere, it will also be the APC debut for drivers Anthony and Begg.

“The APC caught our eye as we have been enjoying production car racing at the State level, but were keen to focus on doing more enduros and racing at other Australian tracks,” Anthony said.

“We are looking forward to Saturday’s Fight in the Night – night racing is always spectacular to watch and it is a good experience to drive the car in the dark.

“We only bought the car eight weeks ago, so it has been a fast build process to say the least. The journey so far has been challenging, yet rewarding, and we are very much looking forward to the first race meeting this weekend.”

The Mercedes-Benz C63 will be part of a 25-plus field of cars taking part in round four of the 2017 APC at Queensland Raceway across August 4-6, with the event to feature two x 300km races, including the infamous ‘Fight in the Night’ under lights race on Saturday evening. Spectator access on Friday is free, and only $20 for Saturday or #30 for Sunday admission – a weekend pass is also available for $40.00. All of Sunday’s action will be streamed online live and free via thenationals.com.au