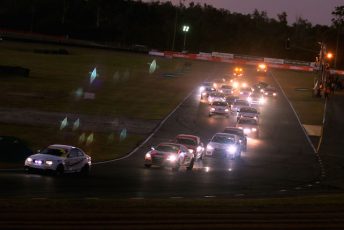 MEDIA RELEASE: The winners of the 2017 NSW and QLD Production Touring Car Championships will be rewarded with a sponsored entry fee into a signature round of the 2018 Australian Production Car Series, thanks to a new deal between the respective series organisers.

The series promoters view the deal as a win-win, and rightly so – at a time where Production racing is thriving in Australia, agreements like this enable both the state and national series to feed off the others’ success – only boosting the potential for further growth going forward.

They say that for the two state series, deals like this will raise their profile, and with strong state racing, the state series have the potential to become a feeder series for their national counterpart.

“We are very excited about the agreement we have made with the Australian Production Cars and Ontic Sports,” said Queensland Production Touring Car President Gerry Murphy.

“This is a new phase in the mutually beneficial relationship we are building with Iain Sherrin and his team.

“We both recognise that strong state level categories will in turn become feeders for the national competition. The local categories will benefit from an overall greater awareness for Production Touring and will continue to thrive and grow.

“This is a very significant prize for the state champions in NSW and QLD and a great opportunity to experience national level racing in their own car. We have high hopes for the growth of the QLD branch of PTC and we are sure this will help entice new drivers to our category.”

The NSW Production Touring Car Championship grids peaked at 40 cars during the 2016 season, and from that success, interest grew in Queensland.

This led to a series being formed north of the border, with the inaugural championship to commence in April. Meanwhile, the Australian Production Cars went through a rebuilding phase in 2016, as the latest revolution in national production car racing was begun under the management of Iain Sherrin and Ontic Sports.

“The APC has really grown across the 2016 four round series, seeing us head to our final round for the year with 32 cars on the grid,” said Sherrin.

“We are expecting further growth in 2017, with two more rounds added to bring our calendar to six events – including the Hi-Tec Oils Bathurst 6 Hour which acts as our first round of the year, as well as new events at Winton Motor Raceway and Goulbourn’s Wakefield Park.

“It truly is an exciting time for the Series, and with this new era of corporation between the APC and the Queensland and New South Wales State Series, I really think the sky is the limit for production car racing in this country.”

The NSW Series will hold two rounds in Queensland in 2017, with Lakeside and Queensland Raceway playing host to the series.

The Queensland series will launch at Lakeside on April 1, with the NSW Championship getting underway on the same day, down at Wakefield Park. For more on the State Series, visit www.nswproductiontouringcars.com.au