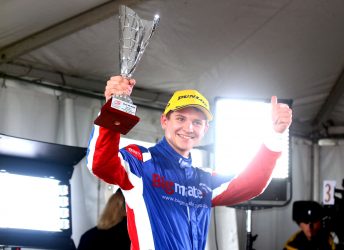 Bigmate Racing’s Todd Hazelwood has continued his strong form in the Supercars Dunlop Super2 Series, after taking another race win in the challenging wet conditions at Symmons Plains Raceway.

The second round for the 2017 season saw the 21-year-old miss the overall round win by a mere two points, after scoring podium results including a win across the four races.

The South Australian native has also closed in on the series lead to experienced rival Paul Dumbrell, now sitting 10 points behind.

“What a fantastic weekend it was for the team and I at Tasmania, the car was one of the fastest all weekend in both the wet and dry conditions and was so close to achieving our first overall win,” Hazelwood said.

“The conditions were really tricky and to get another race win—especially in the wet conditions—was a massive highlight of me. We made a great start passing Paul on the outside and led the race from start to finish, which was awesome and a moment I’ll remember for a long time.

“In Race 4 unfortunately the track dried out faster than I had anticipated and we didn’t set the chassis up for a drying track, although we were strong at the start I started to struggled mid-way to the end and lost the lead and eventually fell back to third. I knew if I finished ahead of PD—the round win would be mine—so I pushed as hard as I could without throwing the race away but couldn’t pull the move off.

“Overall second is a great result and more importantly we collected great points towards the series standings … only trailing the series leader by a small margin.”

The Bigmate Racing driver also added he will be working hard before the next round at Phillip Island, which is in two-weeks time.

“To be honest, after all of the success from the weekend it was tough knowing we lost the round win by one pass, but I’m really hungry to achieve that first round win and it’s only given me more motivation to keep pushing my limits for next time round,” Hazelwood said.

“I’m feeling smarter and stronger than ever behind the wheel of the Bigmate Supercar and cannot wait to continue our great form at Phillip Island.

“A special thank you must also go out to the team at Bigmate Racing and Matt Stone Racing, my team partners, family, friends and supporters for helping me achieve this success … I really appreciate the support and cannot wait to do it all again in a couple weeks time!”

The third round of the Supercars Dunlop Super2 Series will be held in conjunction with the Supercars Championship at Phillip Island across April 21-23 April.