Another title win for McHugh

Another title win for McHugh 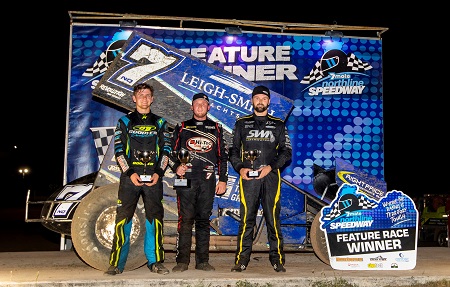 Queensland’s Lachlan McHugh picked up where he left off last season as he added to his recent victories in the South Australian and Queensland State Championships with a dominant display to capture the MMS Civil Northern Territory State Sprintcar Title at Darwin’s Northline Speedway. After starting from position four McHugh rounded up early race leader Jock Goodyer with a spectacular outside pass in turn two and then went on to win ahead of Goodyer, Australian Champion Jamie Veal, Callum Williamson and Matt Egel. The top five therefore represented five different states including Queensland, Tasmania, Victoria, Western Australia and South Australia.

On the podium McHugh was wrapped to have won on his Darwin debut and to add another major title to his growing resume.

“I knew it was going to hard to pass due to the track conditions, so I got fairly aggressive on the start to get into the lead early and from there I just hung on. It was my first time at the track so there was a fair bit to learn but it all worked out” added McHugh.

Second placed Jock Goodyer seemed surprised at how he had performed substituting for Victorian Jack Lee.

“I have just got to thank Jock and the Lee Family for putting me in the car, it was a bullet all night. Tonight, was a great result but now we get ready for the next two weeks in my car” he added.

For third placed Veal he seemed pleased with his podium result due to fact he had been out of the car since April and it was a case of simply getting back into the car, gaining some data and moving on to next weekends Chariots of Thunder series.

Prior to race even completing six laps the field had been reduced by five competitors including Jy Corbet, who slammed the turn one wall, Domain Ramsay who rolled in turn two and Cody Maroske. Who rode out a huge roll after bicycling hard in turn 1.

Jason Pryde, Cody Maroske, Domain Ramsay and Hayden Brown all transferred into the B main while Murray Bridge racer Ryan Jones was unlucky not to transfer after being involved with a lapped car incident while in command of the event. As Jones was approaching the tail of the field Victorian Mark Carlin rolled hard on the back straight after contact leaving Jones nowhere to go and as a result, he made slight contact with the crashed car cutting down the right rear tyre.

The next event at the Northline Speedway in Darwin will be this Friday night with the opening night of the Chariots of Thunder series for Sprintcars, Speedcars and Wingless Sprints.