Another round, another win for McHugh

Another round, another win for McHugh 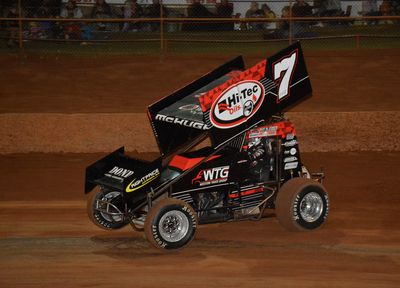 Despite the best efforts of two-time national champ David Murcott in his first Brisbane appearance for more than 18 months, there was no stopping the Lachlan McHugh juggernaut at Archerfield Speedway on Saturday night (May 22). After trailing Murcott through the opening stages of the 30-lap feature race, McHugh would promptly make his way to the front and clear away to win round 12 of the East Coast Logistics Track Championship. By races end, Murcott had slipped to third behind Cody Maroske, with previous round winner Callum Walker bouncing back from a wild crash in the Dash to secure fourth ahead of Bryan Mann and teenage rookie Jy Corbet who, having transferred from the B Main, rounded up the field to leave many more experienced rivals in his wake.

In the Queensland Lightning Sprint Championship, Kurt Wilson proved too pacey in the feature race, leading all the way to finish ahead of Jim Kennedy, Scott Genrich, Scott Jukes and Jason Rae.

A 24-car field gridded on the infield for Sprintcar time trial qualifying and whilst the likes of Andrew Baumber (12.099), Darren Jensen (12.076) and Brent Kratzmann (12.010) would all enjoy a moment atop the time sheets, it was Sydney’s Jessie Attard (11.876) who would ultimately emerge as the KRE Quick Time winner. Murcott (11.879), McHugh (11.964) and Kevin Titman (11.965) would relegate Kratzmann to sixth overall, with Maroske, Walker, Jensen and Baumber completing the top ten.

The first major moment of the night came as early as turn one in the opening heat when pole starter Ryan McNamara, having been beaten into turn one by Kelly, was unable to keep the Titan Garages #88 on terra firma and found himself upside down. From the ensuing restart, Kelly encountered no resistance at the front and raced away to finish in advance of Maroske and Tim Farrell.

Mark Pholi set the early pace in heat two before being chased down and relegated to runner-up by Walker, with Murcott advancing from sixth to finish third.

Adam Butler raced around the outside of Baumber to lead heat three away and the top two spots would remain unchanged to the chequer, with Jensen sitting third until McHugh grabbed the spot from him with three laps remaining.

Butler backed up to win again in heat four, leading all the way from the front row to finish in advance of Titman and Corbet on this occasion.

In heat five, Mark Pholi usurped Ben Hilder from the lead on lap two, only for Kelly to round up both of them to secure a second win and book a place in the Dash. When Attard stopped in turn four as a consequence of contact with the wall a couple of laps earlier, the ensuing restart proved costly for Pholi as both Kratzmann and Maroske moved ahead.

A late-race restart also mixed things up in the final heat, enabling McHugh to chase down Mitch Gowland and snatch the lead in the final turn, with Walker also surging late to grab third from Baumber.

Jason King prevailed in the second of the Development Series heats, leading Jeremy Gaudry and Libby Ellis to the chequer.

In the Petzyo Development Series feature race, which also doubled as the C Main and thereby guaranteed the first four finishers a spot in the B Main, Keiler took control from the outset and led throughout to defeat Gaudry and King. Having failed to start either heat race, Brant Chandler charged from the back of the 11-car field to finish fourth ahead of Howell and Ellis.

Running more than half a second quicker than anybody else, Corbet cleared out in the B Main, only brought back to the field with four laps remaining when second-placed Paul Rooks stopped in turn two. Brendan Scorgie secured second, while a late surge would carry Brodie Tulloch into third ahead of Hilder, although both would advance to the back of the feature race grid, as would Ryan McNamara in the wake of Attard electing not to take his place in the field.

The Dash draw would see a relieved McHugh, as top qualifier, choose wisely from the three available options to remain on pole position, although he would have no answer to Murcott even with a restart following a wild ride from Walker that left him perched atop the turn two wall. Having been unable to avoid the stricken Walker, a tyre change was needed for Kelly to continue. Following Murcott and McHugh home were Titman, Maroske, Kratzmann, Mann and Kelly.

Murcott launched from pole position to lead the feature race through the early stages but it wasn’t long before McHugh assumed his familiar position at the head of the field, taking control on lap eight. Murcott dropped another spot on lap 12 when Maroske moved ahead, with Titman, Kratzmann and Kelly next in line. However, contact between Kratzmann and Titman on lap 15 sent the latter slewing to the infield with a mangled front end, while Kratzmann continued for a few more laps before also heading for the grass. With Kelly also forced out courtesy of another flat tyre, Walker now found himself in fourth spot and closing in on Murcott at a rapid rate. Further back, young Corbet was on a mighty charge, facing little resistance as he surged into the top ten and continued his forward trajectory with little regard for the experience or reputation of his rivals. Out front, McHugh was untroubled in securing his 12th feature race win for the season at Archerfield, finishing more than five seconds clear of Maroske, with Murcott keeping Walker at bay to remain third. Making his first appearance for the season, Mann found himself instantly on the pace and would finish in fifth spot ahead of Corbet, with Tim Farrell the best of the rest. Butler, Jensen and McNamara rounded out the top ten, followed by Baumber, Gowland, Pholi, Scorgie, Hilder and Tulloch.

Jim Kennedy jumped clear of the field in heat two and led throughout to finish in advance of Wayne Jukes and Jayden Mathers.

Sean Iacono launched from the second row to lead heat three, only to be rounded up by Wilson on lap two before spinning away any chance he may have had of reclaiming the lead. Jame Elliott and Scott Jukes filled the minor placings, with Iacono having climbed back to fourth at the flag.

In the closest result of the night, Wayne Iacono edged out Scott Genrich to win the final heat, with Keith Blatch home third to complete a Toowoomba trifecta.

In the 20-lap Queensland Championship feature race, Wilson bolted clear of the field at the drop of the green and never faced any real threat. Likewise, Kennedy held second spot from the outset, with Sean Iacono looking likely to finish third until he spun himself out of contention on the back straight with just one lap remaining. The restart proved no obstacle for Wilson as he negotiated the green-white-chequer sequence with little fuss to defeat Kennedy as Scott Genrich advanced from position ten to snare third spot. Scott Jukes finished fourth ahead of defending champ Jason Rae, who found some pace late in the race after starting at the back of the field. The only other finishers were Scott Moir, Sean Iacono, Jayden Mathers and an uncharacteristically off-the-pace Tyler Stralow.

Doing double duty on the night, Wilson had to settle for second place in the final round of the Done Right Paint Worx Formula 500 Series, finishing more than three seconds adrift of Liam Williams, who also wrapped up the series with his fifth Archerfield feature race success for the season. Bryn Upshall finished third ahead of Brady Argles and Tony Bailey in what was a somewhat subdued finish to their season.

Williams won the opening two heats and Wilson won the other, inheriting the lead when Queensland champ James Kennedy rode out a frightening car-destroying crash in turn one from which he was very lucky to emerge unscathed.

Following heat wins to Ben Le Pla, Jason Glynn and Jacob Lynd, it was Le Pla who would emerge the victor in the Microsprint feature race, despite being overtaken by Eddie Schwehla on the final lap. Schwehla was subsequently penalised by race officials for a restart infringement following an incident in turn three involving Damien Palmer and Adam Jack. With Schwehla relegated to third, Lynd secured second spot, leaving John Lawson and Kaitlyn Field as the only other finishers in a depleted field.

Kev Healy led the first half of the Stockcar feature race before Stu Jefferies slipped ahead to secure his fourth win for the season. Graeme Rangihuna finished third and with Steve Bateman the only other runner, it was a lacklustre end to a night that started so well with a thrilling finish in the opening heat when Bateman chased down Jefferies to edge ahead for the only time as they raced under the chequer.

Racing continues at Archerfield Speedway next Saturday night (May 29) with round 13 of the East Coast Logistics Sprintcar Track Championship AND the Jim Holden Memorial Midget 50-lapper, which doubles as the final round of the TFH Series. Also on the program will be AMCA Nationals, Compact Speedcars, Modlites, Formula 500 Juniors and the chaos, madness and mayhem of the Caravan, Boat and Dunny Derby.