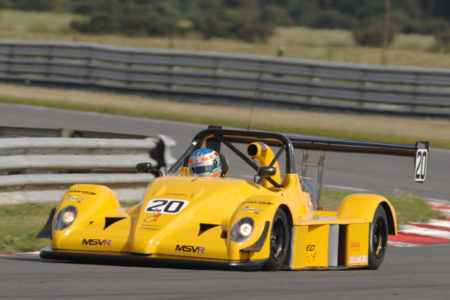 Strong fields and close competition have inspired yet another competitor to further commit to NSW Supersports racing, bringing with them a new marque with strong pedigree.
Windsor-based Aurora Competition will soon take delivery of the ex-works Pilbeam MP98 ‘Virage’ FIA CN car – the first of only two built by the British marque to contest the UK VdeV endurance series.
Pilbeam are no strangers to sports prototype racing, designing, and constructing numerous LMP2 cars for the Le Mans 24hrs and WEC throughout the past two decades.
The MP98 draws from this experience, featuring many of the aerodynamic and suspension concepts from the teams LMP2 cars, coupled with a 2 litre Honda engine, and six-speed Sadev gearbox.
The MP98 signals the Aurora team’s second Supersport entry, having already purchased the ex-Paul Palmer West WR1000, as they aim to contest many of the New South Wales and National Supersport and Prototype events.
Pilbeam adds to an ever-growing list of user-friendly FIA CN/LMP3 type cars to feature on Australian racetracks, which includes the race winning Juno, Wolf GB08 ‘Tornado’, and Praga R1.
With many more of these cars available new and used throughout Europe from a variety of manufacturers such as Norma, Nova Proto, Wolf, Osella, and Ligier, it’s no wonder NSW Supersports continue to field high-quality fields of the states fastest racing cars!