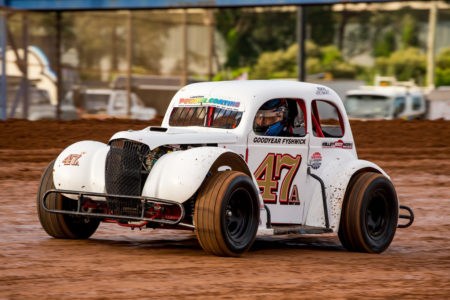 Following a second-place finish in last season’s Australian Title at Sydney’s Valvoline Raceway behind Rob Rawlings Jnr, the Canberra, ACT based Egan was keen to go one spot better, and he came awfully close to achieving this, after he ended up half-a-car length behind his uncle and winner Troy Bolton.

“To finish second again in an Australian Title is a tough pill to swallow, but at the same, it drives me to come back and try it again,” said Egan, who drives the NSW # 47 Onecall Steel, Form & Hire supported car.

“I had good speed throughout the night and qualified on the outside of the front row in the feature race, and I was confident of being able to challenge once again for the win, but the race didn’t go according to plan.”

Egan was fighting it out for podium places throughout the opening half of the 15-lap event, but a driving error saw him banished to the rear of the field after contact with a rival that led to them spinning out.

“It was disappointing to make the mistake, as I was pressing pretty hard to get my way to the front and felt confident in myself with my car setup that I could have stay there,” commented the 26-year-old racer.

“Restarting at the back of the field, I knew I was up against it, but I just wanted to do everything that I could to get back to the front. By the final lap I had moved back up to third, and then the two drivers ahead of me got together and that handed me the chance to get to the lead. Unfortunately, as I was trying to avoid the two drivers ahead of me, I had slightly washed up the track, Troy (Bolton) got under me within sight of the chequered flag, and I went on to lose the drag race between us to the finish line.”

Running only a limited season campaign in the Legend Cars, Egan has spent the second half of this season getting a taste of the Wingless Sprint class.

“My move into Wingless Sprints has been a challenging one, but an enjoyable one all the same,” said the NSW # 47 Onecall Steel, Form & Hire supported QT car.

“Wingless Sprints are one of the most competitive classes in the country and in my first couple of meetings this season running at my home track (ACT Speedway) and also in northern NSW and Victoria, I’ve been learning a lot and growing in confidence with every outing.”