Another Aus title top 10 for Bricknell

Another Aus title top 10 for Bricknell 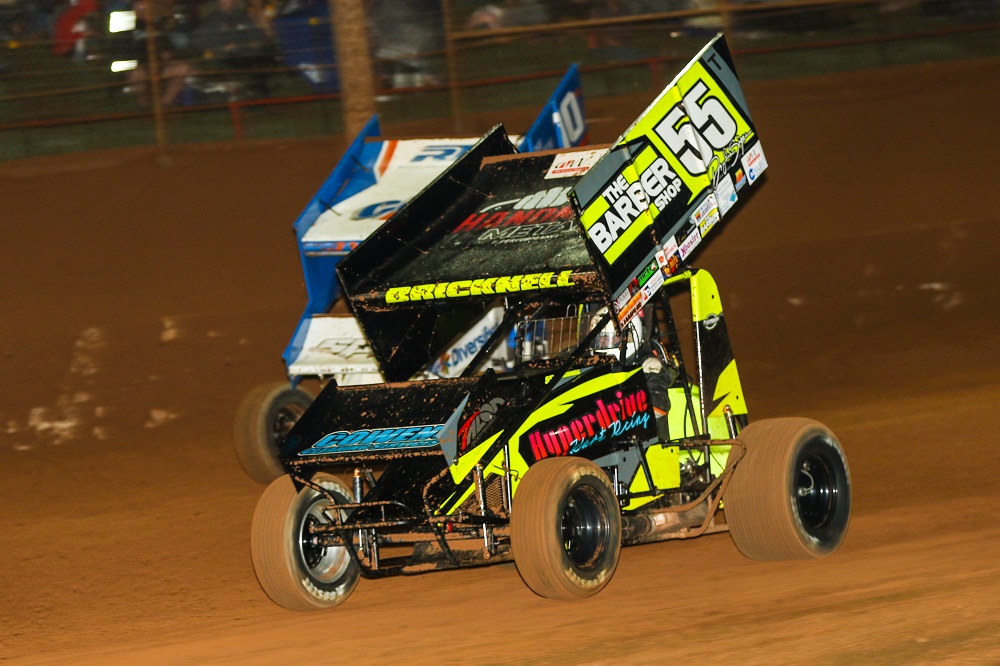 Although he finished last night’s Australian Sprintcar Championship at Brisbane’s Archerfield Speedway with the fourth top-10 finish of his career in the event, it certainly wasn’t an easy weekend for Jamie Bricknell and the team.

Steering the Tasmanian-based Clasener Motorsport Tas # 55 Hyperdrive Kart Racing / Extreme Sprintcars supported Cool, Bricknell had to fight tooth and nail throughout the weekend and all of his hard work paid off when he brought home a sixth-place finish in the Australian Championship deciding feature race.

After a challenging qualifying run, where he missed the heat race invert earlier in the weekend during time trials and had to start from the back of the field in all of his heat races, Bricknell and his team, who hadn’t raced in two months leading up to the Australian Championship weekend, had their backs to the wall, but they pressed on.

Following the two tough nights of qualifying, Bricknell earned his spot in last night’s B main out of position 10. In the B main, he put together an impressive drive throughout the last-chance qualifying event and went on to move into the final transfer spot – fourth – into the Australian Championship decider in the closing stages and he stayed there through to the finish.

In the Australian Championship deciding feature race, the goal for Bricknell and the team was to mainly stay out of harm’s way and bring home a finish. Throughout the 40-lap event, Bricknell drove a solid race to work his way through the field and bring home a sixth-place finish.

For Bricknell, this was his fourth top-10 Australian Sprintcar Championship finish, adding to his 2020 event ninth-place finish with the Clasener Motorsport team at Latrobe Speedway in his home state, which was a very similar weekend to the one just gone after they had back then also been forced to qualify for the feature race via the B main, a fifth place-finish in the 2011 event at Warrnambool’s Premier Speedway (Vic) driving the family-owned car, and a sixth-place finish aboard the family-owned car again in the 2012 event at Adelaide’s Speedway City (SA).

“It certainly was a challenging Australian Championship weekend but I’m very proud of the whole team, as we dug deep and managed to come away with another top-10 finish,” expressed the 32-year-old Bricknell from Launceston, Tasmania.

“I managed to scrap through into the feature race out of the B main, as we had tough run during the qualifying events, so to come from the back of the field in the feature race and bring home the finish that we did was something that well and truly exceeded all of our expectations.”

The Australian Championship weekend caps the 2021-22 season campaign for Bricknell and the Clasener Motorsport team, which saw them run a limited campaign in their home state, but they managed to capture the Tasmanian Title win over the Christmas-New Year period.

Looking ahead to the 2022-23 season, the plans for Bricknell and the Clasener Motorsport team are to try and compete the full season in their home state, along with hopefully contesting various major events on the mainland, such as the Grand Annual Classic and the Easter Trail.

A special thanks must go to Rick Dryden for all of his hospitality shown towards Bricknell and the Clasener Motorsport team throughout the Australian Championship weekend.

Clasener Motorsport would like to thank their 2021-22 season supporters:

Special Thanks: Ash Cleary (crew chief) and the team.