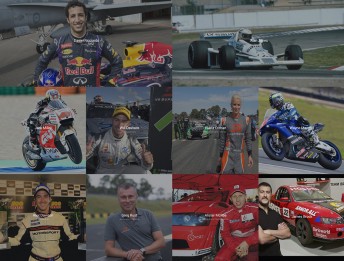 Alex Rullo, now 15, is a V8 Supercar superstar-in-the-making and in June, became the youngest ever driver to win a national Confederation of Australian Motorsport (CAMS) circuit race when he crossed the line at Winton, at just 14 years of age.

The Year 10 Trinity College student recently claimed the title of the 2015 Kumho Tyres V8 Touring Car Series Runner-up and Rookie of the Year.

“I feel really honoured to have been invited to be a part of the 2015 Perth Speed Fest and to have my name in the driver line-up next to some of my idols,” Rullo said.

Experienced rally driver and off road racer Alister McRae’s latest adventure was a brief foray in the now abandoned national series of the Extreme Rallycross, which he explained could be compared to 20Twenty Cricket as opposed to Test Matches.

The McRae name has been synonymous with rallying around the world for three decades with father Jimmy and sons Colin and Alister having won just about every title there is to win between them.

Another rally ace joins the Perth Speed Fest team, Dean Herridge, who has driven in 54 international rally events, including 13 times in Rally Australia.

“My most memorable event was the 2006 Rally Australia where I finished on the podium in the Production WRC class and in eighth position outright – those were great days,” Herridge said.

“I’m looking forward to getting on the twin dirt track at Perth Speed Fest – it’ll be like the good old days of Rally Australia’s Super Special Stage.”

On two wheels, Daryl Beattie is one of Australia’s most loved motorsport heroes. A six-year competitor in the 500cc World Championship, Beattie’s best was in 1995 where he was leading the championship, then despite breaking a collarbone, finished the season runner up.

Beattie’s relaxed and modest manner made him popular on and off the track. Since retiring in 1997 after a number of serious injuries, he has retained his status as being a household name and has been an integral part of Network Ten’s motorsport team for the past 16 years.

Beattie will be on track at Perth Speed Fest riding a CBR1100XX Honda Blackbird.

Perth Speed Fest Event Director Greg McNeil said that besides the exceptional line up of motorsport talent, young and local drivers and riders will be on track.

“Providing a platform for young and local drivers to perform in front of a crowd is part of our event strategy,” McNeil said.

“And, importantly, supporting women in motorsport by showcasing some of our female racers. I tell you, these girls don’t hold back and are just as quick as the boys in their categories.

“Needless to say, they are all thrilled to be alongside names like Ricciardo, Jones, Miller, Davison, Maxwell, McRae and Beattie,” Mr McNeil said.

A local quickly making a name for himself is former world-record holder for fastest quarter mile in a top alcohol funny car, drag racer Craig Glassby.

Glassby is one of the drivers that will go head to head against Ricciardo at Perth Speed Fest. Ricciardo, in Red Bull Racing’s RB7 2011 world championship winning F1 car, will put the F1 car through its paces with laps of the track before lining up against other cars three times throughout the day in a spectacle set to thrill fans.

Perth Speed Fest will be held on 13 December at Perth Motorplex and consist of 60 separate events showcasing more than 25 disciplines of motorsport on five customised track layouts.

For a schedule of events, more on each of the motorsport stars, maps, information, and tickets, visit www.perthspeedfest.com.

Perth Speed Fest will be held on Sunday 13 December 2015 at the Perth Motorplex.