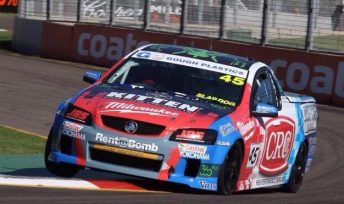 MEDIA RELEASE: Anglomoil, the privately owned Australian lubricant manufacturer, has announced it is continuing its support of Craig Dontas in the Australian V8 Ute Racing Series to the end of the season.

Anglomoil, which has just celebrated its 40th anniversary, got behind the Adelaide driver at Bathurst this month as part of its biggest commitment to motor sport (sponsoring five teams across three categories).

The blue and yellow windscreen strip will now appear on the ute at the Gold Coast 600 and Homebush 400.

Dontas is currently 4th in the championship.