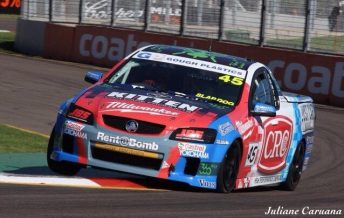 The privately owned Sydney-based lubricant manufacturer’s logo will be seen on Dontas’ Holden ute as he attempts to close the gap on the series leaders.

Following 1 race win, 5 podium finishes and a total of 9 Top Five results this season Craig is on 699 points, just 24 points behind Ryan Hansford and 94 points behind the series leader David Seiders.

The Adelaide driver, who has been racing utes for seven years, will race three times on the famous Mt Panorama circuit this week.

V8 ute racing is a big favourite amongst motor racing fans and is notorious for its door handle to door handle racing and panel damage.

2016 marks the biggest effort by Anglomoil to support teams at Bathurst with Dontas being joined by Cameron Tilley’s Anglomoil Pacer in the Touring Car Masters and three Toyota 86’s.

Anglomoil is a 100% Australian owned and operated manufacturer of “Extreme Performance” specialty lubricants.

With 40 years’ experience, it has the flexibility and know-how to develop unique lubricants for specific environments – such as the RASYN GT40 and RASYN GT60R racing engine oils being used at Bathurst – as well as exclusive formulations which enable customers to rationalise the number of lubricants they require thus reducing their operating costs.

Anglomoil’s products demonstrate their innovation, scientific blending and commitment to only use world-best ingredients.

Their philosophy is one of “Total excellence in all we do” to Protect Your Investment. Anglomoil products are developed at our purpose-built plant at Mt. Kuringai, Sydney, and are used across Australia, New Zealand, Asia and the Pacific.

They are available via a network of warehouses and distributors. www.anglomoil.com