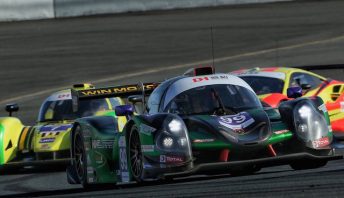 Andrews competed in the second round at Fuji, Japan in December and he was quick to turn heads in pit lane.

Despite being unfamiliar to both the Ligier LMP3 car and the technical Fuji circuit, Andrews topped FP2 time sheets just prior to qualifying.

“Fuji was a good chance to dip my toe in the water and learn about the Asian Le Mans scene. Safe to say I was impressed. It was a good opportunity for me to gel with a new team at a very high level. Buriram is another new track for me but at least I am a little more familiar with the LMP3 now. I’m excited about it! The cars are amazing to drive, I like the atmosphere plus the tracks are enjoyable as well.”

Team Principle Mark Goddard was happy with Scott’s debut at Fuji and positive about the upcoming Thai race: “The team was really impressed with the performance of Scott at Fuji. It was his first time in an LMP3 car and also Fuji was new to him yet he was quickly on the pace and drove faultlessly for the entire event. It was a great debut and it gives us confidence with an incident free run in Buriram we can a top step of the podium finish”

The 4 hours of Buriram will be held this Sunday, the 8th of January. Buriram is an International Grade 2 Circuit 300 kilometres from Bangkok.

The LMP3 car uses a French made Ligier chassis and a NISSAN V8 engine similar to the factory NISSAN V8 in Australian Supercar racing. Michelin racing slicks are exclusively used.