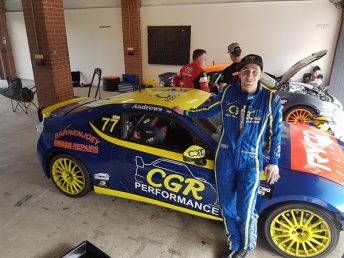 CXC Global Racing has provided a state racing star with the pathway to national motorsport competition, signing Jacob Andrews for Round 2 of the Toyota 86 Racing Series at next weekend’s Watpac Townsville 400.

The 20-year-old has been a front-running competitor in a variety of state-level categories since 2014, including the NSW Formula Vee Championship, NSW Production Touring Car Championship and Series X3 NSW.

More recently, he competed at the Hi-Tec Oils Bathurst 6 Hour aboard one of CXC Global Racing Mitsubishi Evos, running as high as third outright.

Andrews is thrilled to be making the progression to national-level competition.

“I’m really excited to be racing in a high-profile national category, at new track,” Andrews said.

“The thing I’m most looking forward to is the atmosphere, and racing in front of a strong crowd.

“The 86 is very different to the other cars I’ve raced; it’s rear-wheel-drive and doesn’t have a huge amount of power, so it’s important to maintain momentum.”

Team owner Dylan Thomas said Andrews’ long-standing relationship with the team made him a natural choice for the Townsville drive.

“Jacob has been with us for a long time – he started off in our Formula Vee program, and then continued his development in Production Touring where he showed a lot of pace,” Thomas said.

“He has shown a pleasing ability to adapt to different types of cars, as demonstrated in yesterday’s test when he punched out a respectable time during his very first session in the 86.

“Townsville will be a new experience for him – the first time he’s raced on a street circuit – and hopefully the two of us can run competitively over the course of the weekend.”

Round 2 of the Toyota 86 Series will again consist of three races, all of which will be shown live on FOX Sports 506.