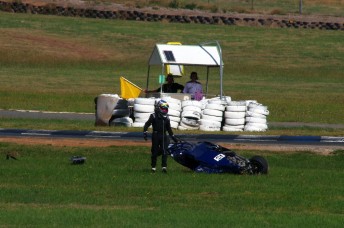 Formula Ford rookie Andrew Kahl has escaped uninjured from a spectacular rollover in Round 1 of the NSW Formula Ford Championship, held as part of the CAMS NSW State Championships at Wakefield Park on the weekend.

In today’s third and final Formula Ford race, Kahl collided with the back of fellow competitor Luke King at Turn 8 and launched spectacularly over the back of King’s car, barrel-rolling several times. 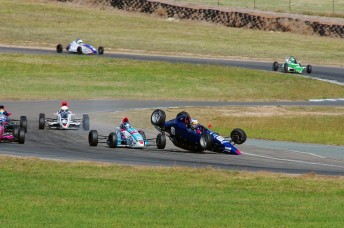 It was a disappointing end for Kahl, who had won the weekend’s second race, while King also retired. Chris Lazarevic took advantage to win the trophy race ahead of Lachlan Gibbons (who won Race 1) and Anthony Colombrita.

Jimmy Vernon was the best of the Kent Class Formula Fords, ahead of Will Powers and the improving Daniel Holihan.

After a successful campaign in the NSW Excel Racing Series in 2013 and ’14, Nick Filipetto made an impressive transition into open-wheelers, winning three of the four Formula 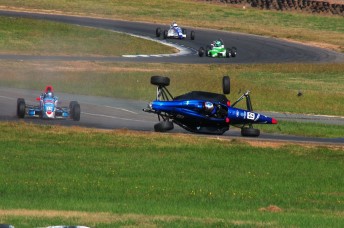 Race Car races in his AGI Sport Dallara F302. Aaron McClintock was the other race winner and finished second in the trophy race, with Greg Muddle rounding out the podium.

Ryan Reynolds claimed a clean sweep in Formula Vee, winning all three races, but the battle behind was intense with Michael Kinsella, Jason Cutts and Dylan Thomas swapping positions. Kinsella broke the lap record in Race 2, almost beating Reynolds in a thrilling finish, but spun off the circuit in Race 3, allowing Thomas to claim second ahead of Simon Pace. 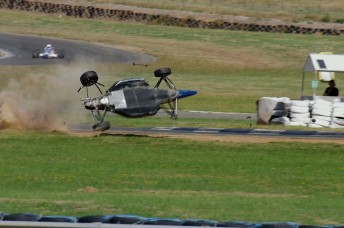 It was a solid recovery from Pace, who had been eliminated from Race 1 in a collision with Daniel Stein.

The Improved Production Over 2 Litre races were a war of mechanical attrition; John McKenzie (Holden VE Commodore) crossed the line first in Race 1 but was relegated to second behind Peter Hennesey (BMW M3) with a post-race penalty for jumping the start. 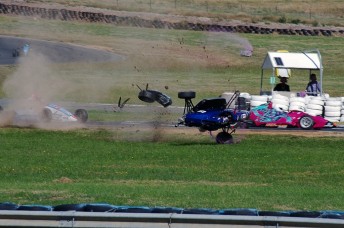 The Supersports category ran on Saturday only and the first two races were highlighted by an intense battle between Nick Kelly (Radical SR8) and Darren Barlow (Stohr WF1). Kelly won Races 1 and 2, but Race 2 was red-flagged when Kelly collided with the lapped West WR1000 of Paul Palmer; the damage to Kelly’s Radical eliminated him from the final race, allowing Barlow to take a comfortable win from Kim Burke (Radical SR3) and Greg Smith (Radical SR8).

The Superkarts also featured at the meeting with four races on Sunday; Aaron Cogger was victorious in all four. Dalton Rowell and Mark Robin completed the podium.