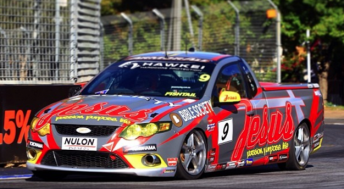 Fisher, from Sydney, has driven a V8 Supercar in the Bathurst 1000, a Porsche 997 GT3 Cup in the Bathurst 12 Hour, BMW and Mini in production series, he is a veteran of the Australian V8 Ute Racing Series and a member of their board and in 2014 he started competing in the Touring Car Masters in a Falcon XY GT…but the thing that makes this racing driver different from others is his extensive community work.

“I really enjoy my motor racing but speaking to young people is a real privilege. To date I have spoken to more than 250,000 young people across Australia.

“I don’t pull any punches. We are not there to tell them what to do or not do but we do want them to consider the consequences of their decisions in areas such as taking drugs, teenage sex, smoking, cyberspace and road safety.

“It’s all about showing them how to make good decisions in the future. You can tell from the expressions on their faces that they understand what I’m talking about. I take my road going version of the race ute which is always a big attraction the students. They love it when I rev the engine.”

Fishtail’s outstanding work with young people was recognised at the end of 2013 when he received the Confederation of Australian Motor Sport Service Star and the Piston Cup, the ‘ Brownlow Medal’ of the Australian V8 Ute Racing Series.

As another way of connecting with the public and inspiring people to live at their best Fishtail is presenting his annual Life In The Fast Lane event on Wednesday November 19.

He will have his racing ute doing live demo’s on the race track…a display of race cars, supercars and sports cars including one of the world’s rarest (1 of only 50) – the McLaren MP4-12C…plus the new Porsche pursuit car for the NSW Police Force…a jet powered remote car…race car simulators…helicopter…entertainment and food.