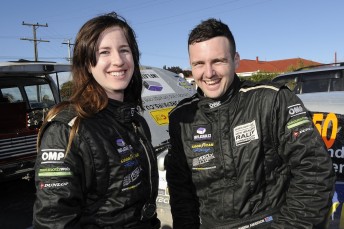 Anderson and co-driver Sarah Brennan start the grueling 12-hour marathon Daybreaker Rally with a 26-point lead in the Open class.

Without any pressure to win their category, Anderson says the biggest challenge will be to get through the nights stages and still be well placed when the daylight stages begin.

“We start in Palmerston North at 4 in the morning, and have to drive flat-out for 200 kilometres, split into 11 stages, before we finish back in the city Square at 4.30 in the afternoon. That’s a long ‘ol day,” said Anderson.

Most of the special stages that make up the Daybreaker Rally are new roads for the drivers with only a few of the stages used in past events.

However, Anderson has never rallied in the Manawatu area before so the event is a completely new challenge.

“I’m looking forward to the night-time stages. We had experience at Canterbury earlier in the season and that was good, so I’m confident we can do well.

“Our main mission is to have some fun and enjoy the day. I haven’t been in the [rally car] seat since the end of July, but I’m sure it won’t take long to get back into it [driving].”

The end of the Daybreaker Rally will also bring up the two year milestone with Brennan calling the safety notes for Anderson, an important role for a driver to build confidence and speed on the high-speed stages.

“Our partnership in the car is developing really well and I’m stoked with the effort Sarah has put in this year. I hope I can reward her with another title by getting the car to the finish on Sunday, and bagging enough points to win a second time,” added Anderson.

With a handy points buffer going into the Daybreaker Rally, the pair will take a conservative approach to give them the best shot of retaining the Open two-wheel drive national title.

“I’ve got to go fast enough to keep my concentration up but avoid the temptation to push too hard. I’m sure Sarah will keep me on the game!”

Anderson (Toyota Levin) is currently on 129 championship points over Brent Taylor (Toyota 86) on 103.