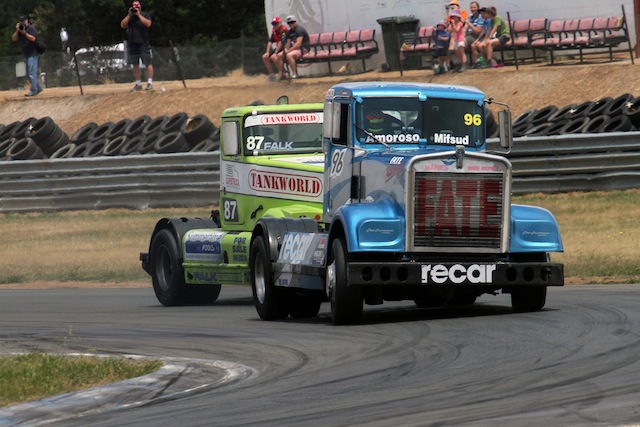 After 26 years in truck racing, Frank Amoroso finally won the championship on the weekend

Truck racing veteran Frank Amoroso is the 2014 Hi-Tec Oils Australian Super Truck Champion, sealing an emotional maiden title by finishing second overall in the final round of the series, which was part of the AASA ACT Championships at Wakefield Park on the weekend.

Amoroso was one of the drivers on the grid when truck racing first started in Australia in 1988, and finally won the championship after 26 years of trying.

Amoroso qualified sixth, before finishing a very lucky third in Race 1 behind Paul Reyntjes and Steven Zammit. The differential mount on Amoroso’s Kenworth broke on the last corner of the last lap, and he only just made it to the chequered flag.

“When I heard the bang I thought, ‘there’s no way I’m not going to finish,’” Amoroso said.

“At first I thought my day was done but when I got out and surveyed the damage, I realised it wasn’t too bad. I got straight on the radio to the crew and by the time the truck was towed back to the pits, they had all the gear ready to fix it.” 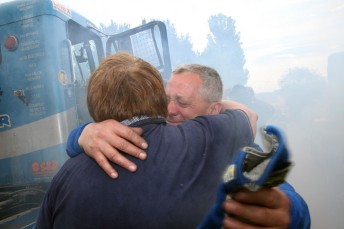 An emotional Amoroso celebrated after the final race

A strong start enabled Amoroso to finish second behind Zammit in Race 2; Zammit was also victorious in Race 3 with Amoroso finishing in fourth, allowing Zammit to slash Amoroso’s series lead to just three points heading into the final race of the season, the 10-lap Super Prix.

“Heading into the Super Prix, I knew it was going to be tough because Steve only needed to finish a couple of places in front of me to win the championship, and his truck had been very fast all weekend. We shook hands before the race started because we both knew there was a lot at stake,” Amoroso said.

“But before the race, the heavens opened and that made me more confident. I’ve always loved racing in the rain so I knew it would work to our advantage.”

And indeed the wet weather did play into Amoroso’s hands; he guided his Kenworth to a third-place finish behind John Bomberle and Barry Butwell while Zammit finished back in sixth after a couple of off-track excursions. It was still enough for Zammit to win the round, but the championship belonged to Amoroso.

“When the race finished, all my crew came to congratulate me but so did the drivers and crew from all the other teams, which was quite overwhelming. I was surprised at just how emotional I felt, but after 26 years of trying to win this championship, it’s an unbelievable feeling to finally do it,” Amoroso said.

“I’d especially like to thank Chris Mifsud, Robbie O’Connor and Charles Dunstan who have been both crew members and good mates for many years.”

While the trucks captured much of the spectator attention during the event, a number of other categories were on the program including two-hour endurance races for the V.E.K. Tools Pulsar Challenge and NSW Excel Racing Series.

Trevor Keene and Phil Alexander took victory in the Pulsar enduro, which was split into two one-hour halves.

Initially the car of Keven Stoopman/Bruce Heinrich looked to control proceedings, with Heinrich opening up a healthy lead, before their Pulsar developed mechanical problems towards the end of the first half with Stoopman at the wheel.

That handed the ascendancy to Max Healy/Geoff Fear, who were leading at the end of the first half.

Healy and Fear continued to run at the front in the second half, but Keene and Alexander overtook them during the final round of pit stops and Keene was able to pull away towards the end, eventually claiming a four-second victory.

Nathan Gotch/Terry Nightingale won the Excel enduro, Nightingale receiving a last-minute call-up to drive with Gotch prior to the event. The father-and-son team of Brett and Phil McFarland finished second ahead of Michael Ridings/Nik Hough.

Callan Sayers won the Swift Racing Series round but Gus Robbins wrapped up the 2014 series, while Daniel Deckers secured the 2014 Mazda MX5 Cup with a dominant round win, taking first place in all six races.

Terry Denovan prevailed in the Super TT races after a close tussle with Stuart Inwood, while Ryan Cochran won the Stock Car races with Michael Coulter and Steve Coulter chasing him to the flag in each one. Ford Performance Racing V8 Supercar team co-owner Rusty French was sixth in the first Stock Car race, but retired from the other two with mechanical problems.

Chad Cotton wrapped up the Miniature Race Car title with a round win; he won five of the six races while Bruce Duckworth won the other.