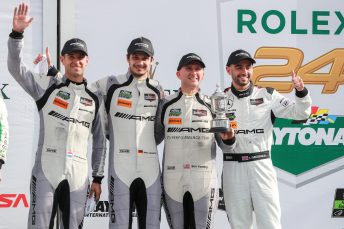 Daytona – Only a fortnight after the 24-hour race in Dubai, the next endurance racing classic on the 2017 competition calendar already was on for Mercedes-AMG Motorsport: the Rolex 24 At Daytona. The participation in the prestigious race in Florida, USA, marked the start of a new era for Mercedes-AMG Customer Sports: the debut in the IMSA WeatherTech SportsCar Championship. In the 55th running of the event at Daytona International Speedway with its long heritage, three Mercedes-AMG GT3 battled for a possible victory in the GTD class, in which cars built to the international GT3 regulations are eligible to race. In very difficult, changeable weather conditions, Riley Motorsports – Team AMG got its campaign off to a good start and finished third in the class that was the strongest with 27 participants. In the overall results of the field with 55 competitors, the team from the US was classified 20th. The driver quartet with Adam Christodoulou, Mario Farnbacher, Jeroen Bleekemolen and Ben Keating started the race from 19th place. The Mercedes-AMG GT3 with starting number 33 made continuous progress and ran in the top three for the first time after six hours with Jeroen Bleekemolen behind the wheel. In spite of the adverse and changeable weather conditions, all four drivers showed a consistent and faultless performance. The race strategy and the perfect pit stops by the crew of the experienced Riley team also contributed to the team’s progress. As a result, the AMG Performance Team established itself in the leading group in a race that was quite fascinating and marked by numerous lead changes. After a total of 634 laps, the #33 Mercedes-AMG GT3 crossed the finish line in third place and thus marked a successful IMSA debut for Mercedes-AMG Motorsport.
The other two Mercedes-AMG GT3 also had good chances in the race: SunEnergy1 Racing with the #75 Mercedes-AMG GT3 was the first team to make it into the top ten. Boris Said (USA) already showed spectacular overtaking after the start. However, the team with DTM driver Maro Engel (GER), Tristan Vautier (FRA), Kenny Habul (AUS) and Boris Said had bad luck and lost its contact to the leaders following an unfortunate pit stop and minor collisions during the night.
Riley Motorsports – WeatherTech Racing racked up the first miles in the lead for Mercedes-AMG Motorsport in IMSA competition with the #50 Mercedes-AMG GT3. However, AMG Driver Thomas Jäger (GER), Cooper MacNeil (USA), Gunnar Jeanette (USA) and Shane van Gisbergen (NZL) didn’t have the necessary racing luck on their side either. After 5.5 hours, New-Zealander van Gisbergen led the GTD field for the first time. However, a puncture caused significant delay soon after that. The driver quartet having made its way up again, the car with starting number #50 became a victim of the extremely wet and difficult track conditions during the night. A spin and an impact into the wall didn’t have any major consequences, but prevented the team from continuing its race.
Tobias Moers, Chairman of the Board of Management of Mercedes-AMG GmbH: “The podium success in the 24-hour race at Daytona, and with so many miles in the lead on top of that, is a very delightful start of our North American programme with the Mercedes-AMG GT3. At Daytona, we have acquired a lot of experience and were already able to score valuable points for the 2017 championship during the season opener. Congratulations to Riley Motorsports – Team AMG that, just like the drivers, of course, has shown a great performance. But also our other two Customer Sport teams, WeatherTech Racing and SunEnergy1 Racing, have represented us in an excellent way. We are looking forward to a great 2017 season.”
Adam Christodoulou, Riley Motorsports – Team AMG #33: “Having to stand in the pits for the final few laps was terrible. I was so nervous. But we made it, we are on the podium. Many thanks to Mercedes-AMG and Riley Motorsports, both have done an outstanding job and I had sensational team-mates. We were fighting and it was great fun. I am very proud of us.”
Mario Farnbacher, Riley Motorsports – Team AMG #33: “It was a tough race. Weather conditions were extremely difficult. Especially in the rain during the night, keeping the car on the track and not getting involved into any collisions was a huge challenge. Every one of us drivers has managed to do so in an excellent way. Unfortunately, we didn’t make it all the way to the top, but we are super happy with this third place.”
Jeroen Bleekemolen, Riley Motorsports – Team AMG #33: “It was very exciting and we knew that we had to fight hard. At Daytona, top speed has a great significance and there, we weren’t the fastest. However, we all have shown a sensational performance and even led for a long time. Therefore, I am a little but disappointed, because I always want to win. Of course, we are happy to go home with our third place.”
Maro Engel, SunEnergy1 Racing #75: “Of course, it was great and an honour to be present for the debut of Mercedes-AMG at Daytona. The team had prepared the car very well and we were able to go the pace in our class. Unfortunately, we had some bad luck with the pit stop and some contact during the night. As a result, we were no longer in contention. Without luck, you simply don’t have a chance in a 24-hour race. Therefore, I am all the more happy that there is at least one Mercedes-AMG GT3 on the podium. Congratulations to Riley Motorsports – Team AMG for its third place.”

Thomas Jäger, Riley Motorsports – WeatherTech Racing #50: “It was clear to see that we certainly didn’t have an advantage with the BoP. Unfortunately, we lacked top speed. But the race has also shown that one can rely on the Mercedes-AMG GT3. The car was competitive and we were able to race among the front runners without any problems. During the night, conditions were extremely difficult and then, such a spin can happen. Too bad, but that’s racing. Otherwise, we would have been in contention for victory.”