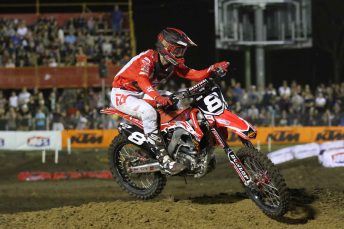 American supercross superstars Justin Brayton and Gavin Faith will lead the charge into Saturday night’s (October 28) round three of the 2017 Australian Supercross Championship being staged under the bright lights of Adelaide Motorsport Park at Virginia.

“Everything has been going really well again this year,” enthuses Brayton, who won last year’s Adelaide Supercross in front of a huge crowd at Wayville.

“My Penrite Honda CRF450R feels like it’s on rails every time I ride it, and I can’t wait to arrive in Adelaide for round three and maintain the momentum.”

As top Aussie in the SX1 standings with 44 championship points to Brayton’s 50, Ferris is aching to turn the tables on his American rival.

“I enjoy racing with Justin, but I am desperate to beat him,” Ferris admits. “He was a little better than me in the whoops at Bacchus Marsh and he is very consistent with his lap speed, so those are two key points I’ve been working on coming into the Adelaide round.”

In the SX2 division, multi-time Australian championship winner Faith made a return to the top step of the podium at Bacchus Marsh, after finishing second to Australian Hayden Mellross (DPH Motorsport Yamaha) at the season opener at Jimboomba.

But Faith did it the hard way in Victoria, crashing heavily in his Heat race and then salvaging a place in the Final by contesting the Last Chance Qualifier.

“I was worried I wouldn’t be able to keep racing after the crash, as I jarred my wrist badly,” Faith explains. “But it felt okay in the LCQ and then in the Final the pain didn’t affect my riding, and I could get the win and the Championship lead, after a rough start to the night.”

SX2 round one winner Mellross had set the early pace in the Final at Bacchus Marsh, but was forced out of proceedings when he crashed into a dislodged hay bale on the racing line. Bitterly disappointed by the misfortune, Mellross now sits sixth in points, while Faith enjoys a ten point advantage over young Aussie high-fliers Jackson Richardson (Serco Yamaha), who is the reigning SX2 champion, and Wilson Todd (DPH Motorsport Yamaha).

Alongside the superstars of the premier SX1 and SX2 Championship categories, Saturday’s Adelaide Supercross will also feature Junior riders in the SX Junior Lites and SX Junior 85 classes. The young guns will gain valuable experience competing under lights on the man-made Adelaide Motorsport Park track lay-out, which will be sculptured into shape from hundreds of tonnes of top soil trucked into the Virginia venue.

Advance purchase tickets to the South Australian round of the 2017 Australian Supercross Championship – which will feature an afternoon Pit Party where fans can meet their favourite riders, and a spectacular fireworks display – are on-sale via the www.ticketbooth.com.au web site. Special family pass packages are available (for 2 adults and 2 children, or 2 adults and 3 children), while all children under 5 accompanied by an adult will be admitted free. Tickets will also be available at the gate on the night.

Gates open at 4pm on Saturday, with the Pit Party and rider/teams Meet & Greet set for 4.30 to 5.30pm, followed by the kick-off to the evening’s main events at 6pm.