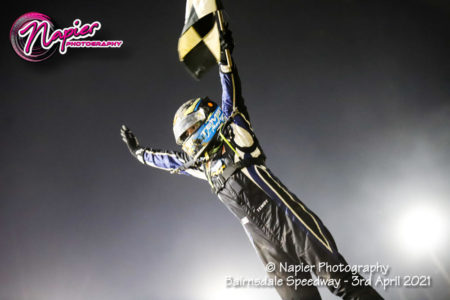 Bairnsdale Speedway has finished its latest race season on Saturday night with an action-packed evening in front of 1400 race fans with a famous victory in the Gary Bowden Cup for Wingless Sprints to celebrate the life of the late Bairnsdale resident when Chris Temby rolled his car in qualifying along the back straight concrete wall and catch fence before returning to win the feature race event.

Top qualifier Brett Pope then inverted the top four cars to the rear of the field to try and win the race with a challenge and collect some extra cash along the way. Paul Drew was elevated to the front row with Kasey Garlick and the two followed each other early in the race. From seventh spot on the grid by lap six Temby had moved to second and to the lead by lap nine.

From their Temby whose father held a friendship with Bowden went on to lead the next sixteen laps and secure the win in front of Travis Evans, Todd Hobson, Peter Logue, and Kasey Garlick rounding out the top five. Temby was amazed by his team and his own effort after the crash and was humble in winning the Bowden Cup. “It is one of the most important races we can do each season and to win it, just feels amazing. This one is for my dad especially since he knew Gary well. Thanks to all the other racers. Matt Eastham and dad’s mate Lloyd Hobson for chipping in to get us racing again for the final.” Shared Temby.

In Sprintcar action teammates Adam Greenwood and Alistair Bastian and then local businessman Shane Steenholdt clean swept the qualifying races for Bairnsdale local drivers before they engaged in a feature race battle. Greenwood was never passed over twenty-five race laps with Bastian and Steenholdt close in battle on occasions before the three finished in that order with Jordan Abbott fourth and Mark Laity finishing in fifth place.

The Victorian Compact Speedcar Club came back to town and for them, records were set for a new one lap time of 16.111 by Justin Paull whilst AJ Wiles set a new ten lap record in qualifiers of almost 3 minutes even. Louis Rodriguez, Justin Paull, Wiles, and Michael Conway shared the heat race wins before a fifteen-lap final. Despite his best-efforts Rodriguez could not upset Paull on his way to back-to-back Keith Astrella Memorial wins with Paull finishing two seconds in front from Rodriguez, Kyle Sharpe from New South Wales, Conway, and Mark Hutchinson.

Over twenty laps the Standard Saloon feature finished just .518 of a second apart between first and second when Patrick Vuillermin led every lap to defeat Rhys Lansdown, Shane Stewart, Kane Gibson, and Bradley Dickson. Vuillermin from Traralgon was almost on record pace for the one lap track record and in the end that record remains intact.

Rounding out the results the Division 2 Hot Rod class also competed and Troy Hutchinson just pipped Ricky Low at the finish line with Jason Seymour and Peter Disher the only drivers to finish rounding out the race result.

Bairnsdale Speedway will resume in November for a new season, in the meantime the club is in search of a new Secretary for a motorsport interested person with the relevant experience or skills to hold such a position.