Almond wins for Sonic in Darwin

Almond wins for Sonic in Darwin 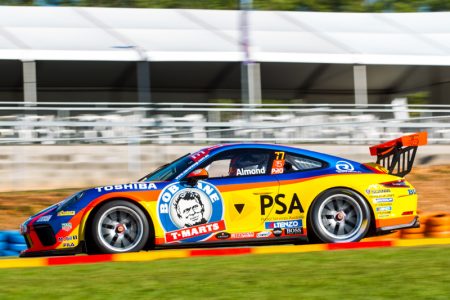 Michael Almond has won Round 4 of the Porsche PAYCE Carrera Cup Australia Championship at Hidden Halley, as Sonic Motor Racing Services experienced a weekend of highs and lows across its four cars in the top end.

The South Australian was the best of the Sonic cars with second in Qualifying. Almond fought hard with Cameron Hill in the opening race but fell just short in the 33-lap Enduro Cup encounter. Almond trailed team mate Dale Wood in a Sonic 1-2 in Race 2, before coming back to take the Race 3 win.

This was Almond’s second overall round victory after he won Round 6 in 2018 in the championship’s first visit to The Bend Motorsport Park.

Dale Wood extended his lead at the top of the Carrera Cup standings after a consistent-run of podium results across the weekend, including a hard-fought victory in Race 2.

Driving the Polyflor Porsche, Wood extended his lead to 165 points ahead of Jordan Love, as Team Sonic remains first and second in the championship at the halfway point of the season.

Starting ninth, Love recovered strongly and charged his way up to fourth in Race 1, before the West Aussie was handed two five-second penalties for contact with Wood and Warren Luff.

In Race 2, Love was an innocent bystander in an opening lap incident at the Turn 6 hairpin, which saw the #777 Bob Jane T-Marts entry taken out of the race and the remainder of the event. Scans later showed that Love has suffered a broken bone in his left hand.

Thomas Maxwell had a promising weekend in his debut event in front of his home crowd. The Northern Territorian qualified strongly in eighth and scored a run of top-ten results in the opening two races, before he was involved in a racing incident in the final race and failed to finish.

Porsche PAYCE Carrera Cup Australia remains in the top end of Australia for the next event, as the championship heads across to North Queensland for Round 5 at the Townsville 400 on July 5-7.

“I’m really happy to spray some champagne again, and to be on the top step is icing on the cake,” said Michael Almond.

“It was a tough weekend of racing as always at the front with Dale Wood.

“I knew I had to make that move on him early in Race 3 while I felt I had good front tyres which I learnt earlier in the weekend, and I got the win from there.

“I made a few mistakes earlier in the year, so i’ve been working hard on my consistency and to combine that with our speed this weekend is certainly good for our confidence moving forward.”

“First and foremost I feel gutted for Jordan Love after his incident in Race 2, it’s put a bit of a dampener on the whole weekend for the team,” said Dale Wood.

“We had a great weekend in the Polyflor Porsche with a win in Race 2 and extending our championship lead.

“We showed some great speed this weekend, we’ll be aiming for more of the same and a few more race wins as we head to the Townsville street circuit in three weeks time.”

“I’ve unfortunately broken a bone in my left hand, but otherwise i’m feeling alright and we’ll be sure to get right before Townsville,” said Jordan Love.

“I was a passenger in that incident, I didn’t see it coming at all and I gave me quite a fright.

“We didn’t qualify well through no fault of my own. I moved back up to fourth in Race 1, but a couple of incidents during the race saw that we received a couple of penalties as a result.

“I started back in 11th for Race 2 before the incident on Lap 1, and that’s just what happens when you’re in that part of the field early on.

“That’s all a part of going racing, we ride the highs with the lows and we’ll bounce back stronger again in Townsville.”

“It definitely wasn’t the weekend we were chasing here in Darwin,” said Thomas Maxwell.

“A few small errors in the first race set us back further when we should be, and once you’re in the pack in this field there’s a risk of being caught up in some incidents on track.

“We were unlucky with what happened on the first lap in the last race, so we’ll follow up on that.

“Townsville is a fresh track for me, so we’re heading there with a blank canvas and no preconceptions.

“We’ll be trying to learn as fast as we can which will be tough around a street circuit, but the cars are strong and we’re looking forward to bouncing back at the next round.”