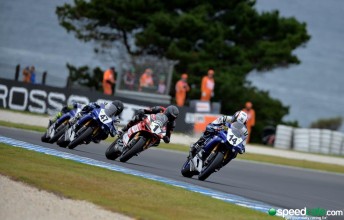 MEDIA RELEASE: Yamaha’s Glenn Allerton has made the perfect start to the 2016 Phillip Island Superbike Championship by winning all three 10-lap races on his Yamaha Racing Team YZF-R1M.

The pressure was intense though, with the New South Welshman’s biggest winning margin just 0.354 seconds when he scampered home ahead of Mike Jones (DesmoSport Ducati) in race two.

The first two races saw Allerton win from Jones and his Yamaha teammate Wayne Maxwell, while in race three Crankt Protein Honda Racing’s Troy Herfoss filled second position on his CBR1000RR. Maxwell, the polesitter, filled the final spot on the podium yet again.

The day before, Herfoss was lucky to stay upright after his teammate Jamie Stauffer clipped the back of his bike and went down coming onto Gardner Straight.

The 200km/h-plus incident saw Stauffer and his bike slide down the main straight at great speed, with the multiple Australian champion fortunate to escape serious injury other than a nasty burn on his right arm which will require skin grafts.

Stauffer didn’t pull the pin though, and went 5-7 in races two and three. Jones, making his debut for the Troy Bayliss-managed team, was fourth in race three.

“I am so excited! To get three from three is pretty unreal, and great to have those going points towards the championship,” said Allerton.  “I have been working hard in the off-season trying to stay fit, which can be pretty hard to do when you’ve got two kids!”