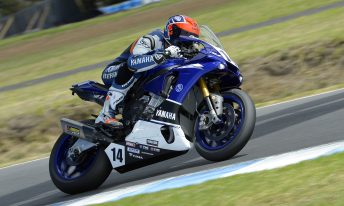 After suffering a badly broken arm in an unlucky fall back at Round 2 of the ASBK (Wakefield Park Raceway, NSW), three-time Australian Superbike Champion Allerton has experienced a long and arduous rehabilitation. The break not only wrecked his chances of another title in 2017, but also put him on a 12-week recovery program that forced him out of two rounds of racing.

Allerton’s first Superbike shakedown since the injury, took place at Sydney Motorsport Park on June 4, after he was given the green light from his doctors. Allerton shared; “I decided to go out and have a go on my practice bike. It’s just a relief to get back on the bike and I’m actually riding at another track day this Saturday.”

Allerton went into detail about the Round 2 injury; “My break was a segmented fracture, there was complete separation and the bone was in three pieces! I had to have a plate and 10 screws inserted to put the bone back together. The biggest challenge that I faced was that the surgeon had to cut in to my arm right through the middle of my bicep to reach the breaks, which is far from ideal for a Superbike rider!”

Recent weeks have seen Allerton hit the gym hard to get himself prepared. “The injury has put me in a position where I have been forced to do lots of physio work. While I’m in the gym, I’ve been putting in hours on the pushbike, the cross trainer and the running machine. Before the injury, I typically spent about three days in the gym, now I’ve been in there just about every day of the week!” Allerton said.

Fellow YRT teammate, Wayne Maxwell has been in sensational form this year, even taking out the previous round of the ASBK held at Winton Motor Raceway, VIC. “Wayne’s in a really strong position in the championship at the moment,” Allerton continued. “You only have to look at his dual victories and pole position back at Winton. It’s pretty clear that Wayne and the team have made substantial improvements with the Yamaha YZF-R1. I can’t wait to get back on the bike and feel the benefits myself.

“It has been hard standing on the sidelines at the track as of late,” Allerton said. “I’ve always held myself in high regard as far as the results that I’m capable of and I want to be involved with developing the bike further with the team. Luckily, Maxwell and myself have a shared objective of what direction we want the bike to head in. Hopefully by paying attention to Wayne’s feedback, it will help me adapt to the YZF-R1 quicker upon my return.”

Allerton expressed his frustration at not being able to compete for the title this year; “Sometimes you can’t control these things in motor racing. I put in so much work over the off-season, including one or two ride days every week to get myself sharp and fast. For one reason or another, we had several issues back at Round 1 (Phillip Island Grand Prix Circuit, VIC) and we weren’t able to show off work that we had put in. At Round 2 Wakefield Park, I was on a mission to redeem myself and win. I was probably pushing too hard in mixed weather conditions, and ended up with a broken arm. The 2017 season starts all over again for me in Round 4 at Hidden Valley, and I’m fairly confident that I can achieve race wins in the second half of the year.”

The seasoned YRT rider set out his targets for the rest of the season; “I don’t think its unrealistic, to get back within the top five, or perhaps even the top three of the Yamaha Motorcycle Insurance (YMI) Superbike Championship standings. My target is to simply win as many races as possible and enjoy the rest of the season.”

Allerton is looking forward to the eagerly anticipated Round 4 at Hidden Valley Raceway, Darwin, Northern Territory.

“I’ve raced there in the past and really enjoyed the track, it always gets a great crowd turnout and has a positive vibe. A sure fact is that its always hot and humid, so that’s going to present a challenge. I always enjoy going to Darwin, and the locals always welcome us with open arms. At least I’ve got air conditioning in the YRT race truck, so I’ll be sorted!” Allerton quipped.