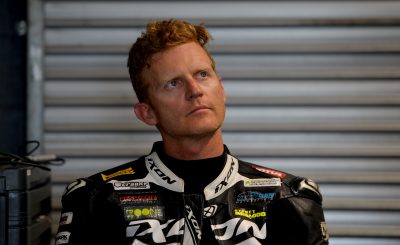 Glenn Allerton’s (NextGen Motorsports, BMW S 1000R) season was thrown into disarray when he injured himself in an unfortunate Motocross accident. Now after missing two rounds of the Yamaha Motor Finance Australian Superbike Championship presented by Motul Pirelli (ASBK), he is setting his sights on the final round of 2018 to make his much-anticipated comeback.

Allerton has been taking part in a private test at Phillip Island, to help regain his touch on the bike and build his strength for the season finale. When he injured himself in a Motocross training accident in July, the damage was severe with two fractured vertebras, compound fracture to his right collarbone and a broken left hand.

Now the well-respected rider couldn’t be happier to be back on the BMW S 1000R. He even managed an impressive fifty laps on the opening day of testing, not a bad day at the office for the three-time YMI Superbike Champion. The ‘Iconic’ Phillip Island is one of his favorite tracks too and he will be desperate to make a statement when the final round comes around, October 12-14.

“I really enjoy racing and riding at Phillip Island, as it’s such a fast and following circuit, which suits my riding style,” Allerton explained. “I’m just so happy that I’m fit enough to be able to get back to racing and finish off the season at Phillip Island,” said Allerton, who is aiming for at least a top three finish.

“All the hard work I’m doing is so when I come down here in a few weeks time, I can win the race,” declared Allerton, who now sits ninth in the standings, as a result of missing two rounds of the championship, with a total of 124 points.

Although the test has so far been successful, Allerton expressed that his body is still not 100 percent fit and he is using the test to help improve his strength.

“When I’m tucked in I’m fine, as the screen covers the wind. However, hanging my head outside the screen is not easy at the moment. In saying that, I kind of expected that. My neck strength is something I have to work on, but you can’t really work on it, until you come and ride the bike.”

His lap times were actually very competitive and it could hold him in good stead for a rider who has dominated at this track in the past. His progress has certainly exceeded his expectations so far. Allerton noted that the focus of the team would be to improve the working balance of the bike and getting the most out of the rear shock.

The return of Allerton will be an exciting addition to an already thrilling 2018 season finale. Although Troy Herfoss (Penrite Honda, CBR1000SP) wrapped up the YMI Superbike Championship back at Winton, there is still plenty to fight for. Riders will be desperate to take out the final round of the season and maintain momentum heading into the 2019 campaign that promises to once again be an intriguing between Australia’s best riders. In addition, the Australian Supersport 300 Championship is yet to be wrapped up and the ‘Superbike Masters’ will be bringing historic action to the fold.

Can Glenn Allerton challenge towards the front of the pack on his return? You will have to attend the Spokes.com.au presents Round 7 Phillip Island Grand Prix Circuit to find out.