Allerton and Guenther ready to back it up at Round 2

Allerton and Guenther ready to back it up at Round 2 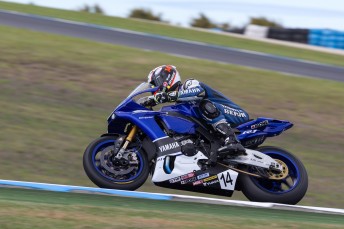 MEDIA RELEASE: The countdown starts this week, with competitors and teams now crossing off the days until they can hit the track once again, at Round 2 of the Yamaha Motor Finance Australian Superbike Championship presented by Motul Pirelli being held at Wakefield Park Raceway this weekend.

With the season opener behind them, and another five rounds of racing to go, ASBK competitors now have a 2016 championship on their minds – and for those leading the points in Superbike and Supersport classes the pressure is on.

Yamaha Racing Team’s Glenn Allerton was the most dominant Superbike rider on the track at Phillip Island, and is now eager to carry his winning momentum into round 2 this weekend.

“I’m pretty confident that I stand a good position to try and win. It’s as close to my home track as you could possibly get, and its one of the tracks where I first learnt how to ride a road bike,” he said.

“We didn’t test for the first round and we managed to win every race at Phillip Island, I just know that the package that we have with the Yamaha R1 is really strong and I am super confident.

“Anything can happen and I think for sure we have the chance to take out another trifecta. I have been undefeated around Wakefield before. It’s going to be different now with really hard competition in my teammates, but also Troy (Herfoss) on the Honda and Mike Jones on the Ducati. Its going to be a battle as far as who can get the most out of themselves and their bike for the weekend.

“My body is feeling good, the bike is good, and I have a new bike to ride this weekend so I am excited about jumping on the new 2016 model R1 at Wakefield Park.”

For round one Supersport winner Troy Guenther, round two at Wakefield Park provides the opportunity to snatch up crucial championship points once again.

“I feel really good – the Graffiti Alley Yamaha Team have been working really hard in between rounds to prepare the bike, and I feel really confident for Wakefield,” he said.

“We have had some really positive testing sessions there, and I am feeling great for Round 2.

“Its quite a different track to Phillip Island, so its going to be interesting to see how everyone adapts at Wakefield – it’s a great track that suits our Yamaha quite well so I am excited to race it.

“After Phillip Island we have a clear direction of what we can improve on – I have been continuing to train, and have been building on my fitness for race distance. I am most excited to just be racing again this weekend!”

Tickets for Round 2 of the 2016 ASBK Championship are still available. For prices, and schedule for Round 2, head to www.asbk.com.au