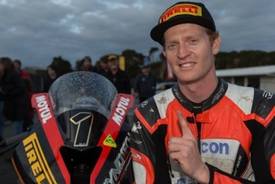 Glenn Allerton has claimed the 2014 ASBK Superbike Championship after an exciting weekend of racing at Phillip Island.

In contrast to Saturday’s racing, Phillip Island struggled to produce a completely dry track throughout the day, however it would prove no difference to NEXTGEN Motorsport’s Glenn Allerton as he claimed the third ASBK Championship of his career.

Race one of the Superbike class was a thrilling battle between Allerton, Race Centre’s Jed Metcher and LMR’s Linden Magee took it right to the wire.

It set the stage for what everyone thought would be a highly competitive Race 2, however Metcher pulled ahead in the final laps to take the win from Allerton by just over 3 seconds, Magee again took third.

“The race was tough.” said Metcher who returned this weekend for his first competitive hit out after injury.

Allerton said: “I’ve had a really good day, the other boys (Metcher and Magee) were riding really good especially in these sketchy conditions, the last corner was really wet and these two were just pinnin’ it through there and i have no idea how they were going so fast at the start.

“I’m really happy to finish the weekend off still on two wheels because the conditions this weekend were really tough and it was great fun racing against these two, they really put the challenge to me again which I enjoyed.”

Allerton said despite this year’s championship coming down to two rounds he’s still over the moon with the win.

“I’ll take it, in five years’ time when my son’s at school he’ll be able say ‘my Dad’s a three time Australian Superbike Champion’ they won’t go ‘but he only raced two rounds so only two count!’, nobody will care!”

After winning Superpole on Saturday, Falzon started strong in Race 1 to beat home Wagner by .085 seconds and Matt Davies finished three seconds behind in third in what was arguably the race of the day.

In the second Supersport Race, Falzon remained calm and composed and guided his Yamaha YZF-R6 home in fourth, enough to clinch the 2014 Championship, Race 2 was won by Wagner with Mackay Kawasaki’s Luke Burgess in second and Adrian DiGiandomenico took third.

Falzon could’ve finished tenth and still claimed the top gong and he knew he had to ride safely and simply finish.

“Race 2 was all about the Championship,” Falzon said.

“I didn’t really want them to go out too far in front at the start but I had to and it was gut wrenching seeing them get so far ahead.

“I’m a strong supporter of the ASBK and I can’t wait to be back next year in a bigger and better series!”

Western Australian racer Jessica Derrin had a weekend to remember claiming both the Women’s and Production 250 titles, Mitch Kavney took the Production 300 class out and Craig White went home as Formula 400 Australian Champion.