All roads lead to Indy for Jake Parsons

All roads lead to Indy for Jake Parsons 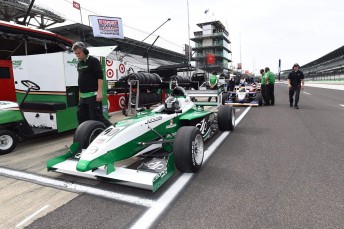 MEDIA RELEASE: As the ‘month of May’ continues, Indy Fever is inevitably growing, and Australian Pro Mazda racer Jake Parsons is far from immune.

During the build up to this weekend’s Angie’s List GP of Indy, the Juncos driver has been soaking up the history of the Speedway.

Speaking after seeing the iconic Borg Warner Trophy, he stated, “It was cool seeing the faces of some of my heroes on there, alongside the greats from the past too.”

The Sydneysider had his first taste of the legendary circuit last week, giving pace car rides around the track, which he described as ‘an amazing experience.’ But the focus now is fully on the next two races in his Mazda Road to Indy Series challenge, to be run on the Indianapolis road course.

“Now we’re in a race meeting it’s game time. The pressure is on to perform and try to own Indianapolis as my circuit now.”, said the #00 car driver.

“It’s awesome to race on such a special track. I did Bathurst last year, which is the Australian equivalent of Indy, so it’s cool to be here now. It’s part of every driver’s bucket list.”

Parsons, who won the 2014 AsiaCup, has been impressed with the Indianapolis GP track so far.

“I’ve seen it on TV for a few years and always thought it looked cool. Now I’m actually here, I really like the smoothness of the circuit. It’s kind of European in that it’s very wide with a lot of heavy braking zones, and that usually suites me.”