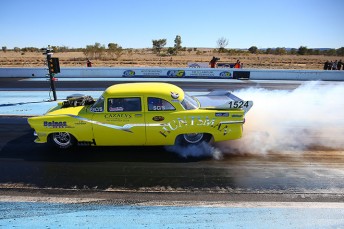 Hunt hoisted the ANDRA tree after turning a round one win against semi final-regular Doina Day into an upset round two win against top qualifier, current Champion and Nitro Up North winner Adam Murrihy into his finals date with Russell. His ultimate victory would come courtesy of a 4.981s/142.41mph (4.95s dial-in) effort over Russell’s 4.439s/160.14mph pass (4.40s dial-in).

“It feels fantastic to win. Absolutely fantastic,” said Hunt, whose win comes after 18 months out of the seat and despite almost not competing this weekend.

“We had a bit of bad luck on the way coming down, blowing the bus motor up. That set us back a little bit and took my concentration away from the car and all of that sort of stuff, and after that happened I didn’t know if we were going to race here but I needed to race because the field was short.

“So I thought, let’s just concentrate on (the racing) and forget about the bus for now, we will deal with that later.

“The car was playing up a little bit here and there, it is a new combo, so just trying to get used to it and then all of a sudden my engine builder David Baines of Baines Engines got a hold of it. 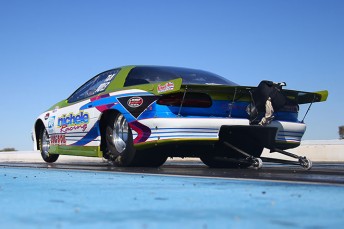 “My crew were fantastic and steered me in the right direction and then I just steered the car in the right direction and we just got through – it was amazing. We raced against three of the best drivers out there today one after another and that was just unbelievable. They are all switched on and are good racers and I have been out of the seat for over 18 months, so to come back in one meeting and do this is just fantastic.

“In the final I just concentrated – I had my list from my engine builder telling what I had to do and I thought let’s just go out there and go for it, we have nothing to lose, we are going to be second anyway. But then everyone said to me ‘nah, nah we are going to be first!’

“I am really loving the pro tree – it is perfect for me as when the tree is on the left in my car I can’t see all of the lights, and with the pro tree you only need to see the first one. It was a good move by ANDRA to bring that in I think.

“It has just been a buzz, a real buzz. It is so fantastic to be up there and ANDRA and everyone involved are just fantastic.”

In the final of Top Sportsman, it was a battle of the Lucas Oils-supported racers, with Matt Forbes (5.001s/143.33mph) taking on and defeating current Champ and Nitro Up North winner Jason Stares (4.796s/146.10mph).

For Stares, it was his third final in a row dating back to last season’s Grand Final, but this time it was Forbes who took the victory – his first ever event win in Top Sportsman after having previously won national events and Championships in Super Gas and Modified. 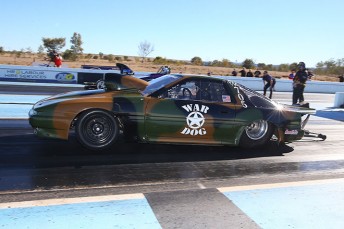 On his way to the victory, Forbes dispatched Frank Oliveri (Rd1) and top qualifier Dan Saliba (Rd2), while Stares faced off and took victory from Rick Smith (Rd1) and Greg Damiani (Rd2) on his way to the final stand.

“This is fantastic – this is the third category we have won in now – Super Gas, Modified and Top Sportsman – but to get a win in this class which I class as a really, really tough class against some of the best racers is very satisfying,” Forbes said.

“This is Frank and Gilbert Nichele’s car which they allowed me to drive for them, we brought it up and we had a real struggle in the first two qualifiers – we had to abort the passes as it was not going straight at all.

“So we worked and worked and by the third qualifier we got it down the track in some fashion and then the fourth one was really good. When we started today the car just got better and better and the driving sort of got better as well!

“We met Jason Stares in the final, we are both sponsored by Lucas Oil Products and Sunset Performance Engines.

“Jason is a tough racer, there is no doubt about that. That is why he carries the number one on the side of his car, so to race him and then to beat him was very satisfying – he is a great racer and I have a lot of respect for him. 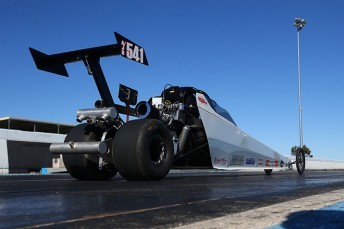 “We went out there, I was under the impression I would hit the tree hard and Jason is a faster car and would chase me. I got to the end and didn’t see him so I dropped the nose, and went 5.001s – we were all pretty happy with that.”

The Super Comp victory was taken out by Graeme Simms, who raced Louis Svingos for the event win (5.935s/100.90mph v 7.993/58.67mph). The battle to make the final started off with some shock eliminations – with Competition Eliminator Champion Craig Geddes; Super Stock Champion and Nitro Up North winner Kim Fardella; and top qualifier Jamie Chaisty all eliminated in the first round.

While the racing might not have gone Chaisty’s way, he does still walk away from Alice Springs with something to smile about, having reset his big brother’s national H/MSA record to 5.928s at 115.38mph – at the same track and in the same car. Also setting a new national record was Super Comp racer David Dequen (eliminated round two) who with an E/AA 145.16mph effort beat his own record which he had originally set at ASID last year.

“It feels great to win, it has been a long time! I have been out of the seat for four and a half years now, so it has been great to get back in the seat,” said Simms.

“We struggled mightily in Darwin but it all came good today – it is just a matter of me getting in the car again, I am forgetting all sorts of things, at 70 years of age you tend to do that,” he laughed.

“We went our fastest ever last night in the 60 foot time and mile per hour, so we were pretty wrapped on that. And then in the first round we had a tough one with Kim, we knew he would be tough, and then the second round was even tougher with Dave Dequen, if he hadn’t of bolted I think Dave would have had us. And then we raced Louis – I knew he is sharp on the lights so we had to have our A-game on at the lights. I kind of missed them but he missed them a lot more so it was kind of over at the start.

“It feels good to be back in the seat, and it feels great to have a win too. It was tough – all the racing was tough this weekend, so to go through and get to the final and win, I will take it! I am wrapped.” 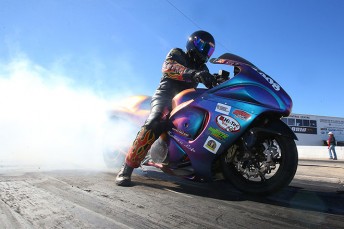 In Super Sedan, Peter Tzokas (9.859s/135.55mph) triumphed over the ‘breaking out’ (running faster than his dial-in) George Tipouikidis (10.238s/129.40mph). On their way to the finals, Tzokas faced off against David Yanko, Mike Brideson, and Darren Baumann; while Tipouikidis emerged with race wins from Brett Matthew, Ned Karanovic, and Steve Hunt.

For the Super Street bracket, it was Jacob Mills (12.211/93.39mph, 12.1s dial-in) who left with the winner’s trophy after taking on Allan Hutchen (11.451s/110.62mph, 11.3s dial-in) in the finals. Earlier, Mills took on and defeated Matthew Jarvis and Paul Garbellini, while Hutchen raced against Conan Latham, Craig Caton and Simon Lazzaro.

While the Summit Racing Equipment Sportsman Series provided plenty of fanfare for the enthusiastic crowd at Alice Springs Dragway, there was also plenty of other action on-show across the weekend including championship racing for Top Doorslammer and exciting exhibition passes from both Matt Abel in his Outlaw Nitro Funny Car, and Chris Porter on his Top Fuel Motorcycle.

ANDRA congratulates the Central Australian Drag Racing Association and Alice Springs Inland Dragway on a fantastic event and thanks the volunteers for their outstanding efforts prior to and throughout the weekend.

The next round of the Summit Racing Equipment Sportsman Series will take place at the Mildura Sunset Strip across October 22-23, 2016. For more information, visit www.andra.com.au