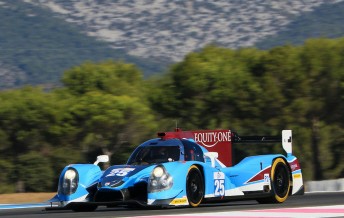 MEDIA RELEASE: For their second ELMS event, Algarve Pro Racing and the #25 Ligier JS P2 once again received the chequered flag in the top 10, scoring an encouraging eight position at the Le Castellet circuit in Southern France.

All the race weekend long, drivers Michael Munemann, Andrea Roda and James Winslow and all the Algarve Pro Team crew could rely on a consistent and reliable car to gain experience and competitiveness.

The free practice sessions confirmed the potential of this combination.

The #25 Ligier partnered by Equity One climbed up to 8th in FP2 and qualified 9th, easily maintaining the team’s position in the overall top 10.

Despite an incident with a GT in the early stages of the race, Algarve Pro Team once kept the pace, finishing 8th overall.

This is the best encouragement the team can enjoy before getting back home for the final race on the Estoril circuit near Lisbon, the Portuguese capital.

Jerome Elias (Algarve Pro Racing engineer): “We started the race weekend pretty well, we discovered the circuit and found out the appropriate set-up for the car. In race we had a good first stint but we had a collision with a GT when driving into the pit lane so we had to change the front nose.

“But when back on the race track we were in the pace of the leading LMP2s thanks to the set-up we defined in free practice. We make good progress and gaining pace from one race to the other with a reliable car. So we are optimistic for the final ELMS round at Estoril for our home race.”

James Winslow: “I was in the car for the third stint. It was a long one and the car stood up very well with the softer tyre compound with high downforce. So I could have a very good pace and gain positions after this incident in the early part of the race.

“This is very encouraging for our second ELMS race. Everyone in the team did a very good job and I am sure things will be even better for the next race. Estoril is the home race and the team completed a lot of testing there so I think that we can score our season’s best there.”

Andrea Roda: “Michael started the race and I took the wheel after him. The car was really comfortable to driver and I am very happy with my stint. We could have enjoyed a better result but we know we had a good pace after the incident so we know we can make it good at Estoril.”

The final race of the 2015 ELMS will take place at Estoril on October 17-18. After this very special home event, Algarve Pro Racing will be competing overseas in the forthcoming Asian Le Mans Series season.