Alexandra Speedway season kicks off with plenty of happy faces about

Alexandra Speedway season kicks off with plenty of happy faces about 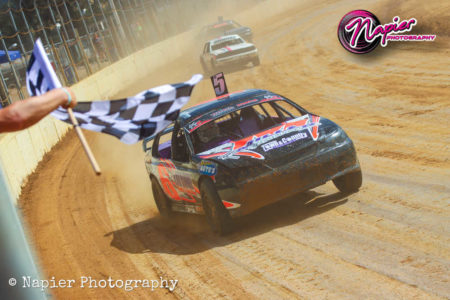 After the tough on and off, stop and start period of Speedway racing of the last eighteen months, Alexandra Speedway kicked off for the new season with all the club classes getting a run along that included four different Junior Sedan classes. Wins were earnt by Damien Miller in Sports Sedans, Gary Evans in Standard Saloons, James Oliver in Top Star Juniors (up to 1500cc), Will Fallon in New Star Juniors (Developing drivers up to 1500cc), Dylan Barrow in Junior Sedans and Arthur Hutchinson in 1200cc Junior Sedans.

With the Summer upon us, the Alexandra and District Speedway Club will be dormant until February 26th to avoid the heat in the open Valley, club members as a result were more than keen to get this race meeting run and won.

Sports Sedan action was fierce, especially in anticipation of the upcoming state title at the Alexandra venue and Alexandra’s top Sports Sedan drivers qualified strongly for the twelve-lap final. Damien Miller led the feature event through lap one with Josh Service from Lilydale, Brendan Miller, current Victorian Champion Lee Beach and former two times state champion Jamie Paull following him the first back across the start and finish line. Beach and Paull both went no further than lap one though and Luke Fallon elevated himself into the chase. Fallon though and David Donegan were the next two big guns in the field to find themselves out of the race.

Gary Evans who holds three of Alexandra’s Standard Saloon track records, returned to compete winning two of the three qualifiers in his Commodore Station Wagon. In the final Evans assumed control of the race with Kacey Ingram and Matt Davis in second and third spot. Daryl Joosten and Jaimi Barber competed strongly however the chequered flag unfurled as Evans took the victory from Ingram, Davis, Joosten and Barber.

Dylan Barrow had a clean sweep of the Junior Sedans winning three qualifying races before taking the feature race win by a large margin, at a pace around a second per lap quicker than his competitors. Rhys Meakins finished comfortably in second place from Jayden Bryant, Harry Cecil, and River Paterson.

Arthur Hutchinson won the 1200cc Junior Sedan class after his close friend Riley Taylor won the first heat of the night. Hutchinson then won the next two heat races and then went on to win the feature event leading every lap. Braiden Webster finished second a long way back however in a close battle with third placed racer Will Fallon. Riley Taylor finished fourth with Jack Kershaw rounding out the top five with just over a second separating second to fifth.
Will Fallon a local Alexandra junior racer in the New Star class and the 1200s, had a great run in the New Stars, winning two of three heat races and then the final by thirteen seconds. Xander Baxter finished in second and Allie Erickson ahead of Jasmine Bryant and Isabella Thornton.

Rounding out all the results was the Top Star Juniors. James Oliver in the heat races was the only racer to win more than one of the qualifiers. Rhys Meakins, Nathan Miles, Dylan Barrow and Bree Simpson were the others to win. In the feature event Oliver led from pole position from Bree Simpson and Meakins. Four laps into the race Barrow moved into the third spot before Meakins came right back past him into third. Meakins then went on to pass Simpson into second and when the chequered flag dropped, Oliver had beaten Meakins, Simpson, River Paterson, and Miles.

Alexandra Speedway return on February 26th AMCA Nationals visit for the first time in many seasons and all club classes will be on the show.