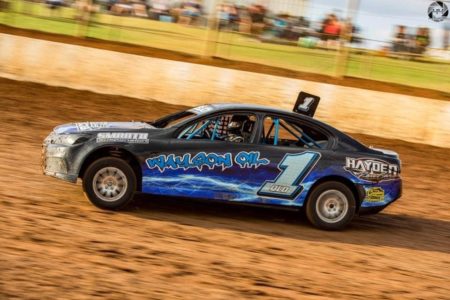 Alexandra Speedway plays host to one of the biggest and most popular Victorian Speedway titles this Easter long weekend when they see forty of Victoria’s, South Australia’s, and New South Wales best Street Stock drivers in town on Friday and Saturday evening to put on a show not to be missed.

Drivers then come back again on the Saturday night for to compete in some more qualifying before cars are scheduled into main events because of their qualification points.

In the Street Stock line-up nine Alexandra club members will be vying for champion honours with Matt Nelson from Woori Yallock the current Queensland Champion the number one driver in that list. Dale Morrison normally the Alexandra Speedway Club Chief Steward recently finished sixth in the South Australian title and is primed for a good run on a track he is a member of, plus add in Adrian Lawrence, Tyler Barton, Dylan Campton, Greg Parks, Kevin Brogmus, Ricky Cornwall and Adam Barkby and the members are ready to defend home turf.

The toughest competitor to defeat in the line-up is Anthony Beare from Mount Gambier. Beare is a four times national champion and a multiple times state champion around Australia, including having won six Victorian titles, including the last at Mildura.

Fans should come prepared for two days of action with overnight stay on the property allowed. Spectators should adhere to Covid restrictions such as remaining only in close contact with those you spend day to day with.

In Sports Sedan action Damien Miller broke the track record at the last race meeting and is back to try again. He will have the toughest of tough competition from Luke Fallon, Steve Kershaw, Dale Smith, Robert Garlick and Josh Service. It might not be Miller who breaks the records, it may not be Miller that wins.

Top Star Juniors once again will be challenging with Linken Paterson the most recent winner. Paterson has a target on his back with Dylan Barrow, Jayden Bryant, Rhys Meakins, Breanna Simpson, and River Paterson just some of his keen competition this weekend. For some, it is important to get some bragging rights before the upcoming Victorian title at Nyora Raceway a week later.

Some visiting drivers may prove to be tough competition for the Junior New Stars this week. Jacob Tinworth and Miller Throckmorton are developing well and are achieving wins and podiums of late. Christine and James Oliver, Maddy Capon, Tamika Simpson, and Jack Kershaw will lead the Alexandra defence of home track territory. Some exciting racing ahead this weekend for the developing Juniors.

Some chance also this weekend that Standard Saloons could break some track records also with the calibre of competition. Wayne Sheerman has wins under his belt this year in his new race car and has proven to be quick. Jeff Oldfield was one of the top qualifiers recently in the Victorian title and is one to watch, along with Kacey Ingram a young star, and Stephen Douglas. From the top to the bottom of the entry list, every driver is a potential stand-out on race night.

Spectators, please note anybody that comes on Friday night will automatically have to buy a two-day pass. If that spectator for one reason or another then comes to the gate staff at the end of Friday night needing to leave and not return, the second day’s costs will be refunded.

On Friday gates open from 8am, entry fees are $40 for a two-day adult ticket, $20 for a two-day aged or disabled pensioners ticket and a ticket for a child aged 10 to 16 years. Kids under the age of 10 can attend for free. A family ticket for 2 adults and three children between the ages of 10 and 16 is $100.

For Saturday night only, Racing starts from 4pm, gates are open from 8am at a cost of $50 for a family of 2 adults and 3 children between the ages of 10 to 16, $20 per adult and $10 for children aged 10 to 16 and aged and invalid pensioners. Children under 10 years of age enter for free.