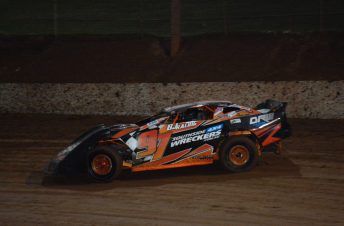 In a spectacular end to the Queensland Super Sedan season, South Australia’s Ryan Alexander has emerged triumphant in a fabulous Think Money Championship Series finale at Ausdeck Patios Archerfield Speedway on Saturday night (May 6). In a race that featured three different leaders and innumerable positional changes through the field, Alexander held firm at the front to score a win for the newly formed Hussey Racing Team at their first attempt. Wayne Brims occupied the top spot through the middle stages of the race before being gazumped by Alexander in lapped traffic, with Matt Pascoe’s tenacity being rewarded with a third-place finish after starting on the fourth row of the grid. On a challenging track that produced some superb racing, Wayne Randall finished fourth ahead of Ian Brims and early leader Steve Jordan.

Dirt Modified action saw David Clark prevail in the 25-lap feature event, slipping into the lead on lap five and scooting clear of the field to lead Ray Eggins and Andrew Pezzutti to the chequer, with Terry Leerentveld and Andrew Firth completing the first five.

On a night that saw none of the three national champions in action go the distance in their respective feature races, there was action aplenty across the board.

Twenty Super Sedans fronted for competition and it was Darren Kane who proved unstoppable in the preliminaries with three dynamic wins, the first of which came in the opening heat of the night when he romped home ahead of Mark Pagel and Wayne Brims.

Pascoe countered in heat two with a strong win over Randall and Jordan before Kane returned in heat three with another dominant display to defeat Randall and Alexander.

Steve Jordan led the opening moments of heat four before Wayne Brims took control and subsequently secured victory, with Pascoe advancing from the back of the grid to snare third.

The Penrite Grid Draw mixed things up for the feature race grid with Alexander ascending to pole position with Jordan alongside. Wayne and Ian Brims would share row two, with Kane’s heat race heroics bringing no tangible reward when he found himself situated on the inside of row three beside Randall. Pascoe fared even worse, relegated to position eight on the outside of Pagel. At the drop of the green, Jordan jumped clear of Alexander to lead the opening lap, only to have the interstater assert his authority and assume the lead on lap three. However, it was just two laps later that Wayne Brims stormed into the lead and remained in control until lap 21 when Alexander pounced amidst lapped traffic to resume the front running. After dropping a spot in the early going, Kane had climbed back to fourth when a jammed throttle sent him hard into the turn two wall and out of action. Pascoe, meanwhile, was using the deep cushion to also move forward, advancing to third on lap 25 before being relegated by Randall. After backsliding as far as sixth, Pascoe rebounded to claw his way back into the top four before eventually snaring third in the frantic final laps. Behind Randall came Ian Brims and Jordan in advance of Sam Roza, David O’Keefe, Jack Childs and Sean Black, who persevered with a lack of power steering and deserved a better result for his highline heroics, with Brian Trevithick and Nick Sampson rounding out the finishers. It was a disappointing end to an otherwise outstanding season for Pagel when, ironically perhaps, it was a lack of brakes that stopped his race, while Nicholas O’Keefe and Mark O’Brien also failed to go the distance.

Following heat wins to Clark, Eggins, Kevin Stow and national champ Kevin Britten, who was a no-show in the feature with an engine ailment, it was Eggins who launched best in the feature, leading Clark and the pack through the opening five laps. When Clark swept to the front, Eggins was now faced with a challenge from Andrew Pezzutti, who moved ahead on lap 10, only for Eggins to reclaim the position on the next circulation. The top three then remained unchanged until lap 20 when Pezzutti rode out a wild moment through turn four that seemed certain to end with the NSW champ upside down. An impressive Terry Leerentveld pounced to move ahead of the recovering Pezzutti, but those positions would change again just two laps from home. Up front, Eggins made a late lunge on Clark following a late-race restart but couldn’t make the pass stick and had to settle for second, with Pezzutti securing third to deny Leerentveld a place on the podium. Andrew Firth finished fifth, ahead of Garry Wathen, Anthony Ashen, Lance Towns, Nick Knott and Sam Brown.

In a race that saw Nathan Mathers and Trent Usher ride out heavy wrecks, Jim Kennedy took out the Paul Messer Memorial Compact Speedcar feature race to become the seventh different feature winner for the season. In his best drive since returning to competition, Steve Swingler finished in second spot ahead of the unheralded but impressive Ricki Harrison, with Robbie Stewart, Dave Collins and Mick Hunter the only others to go the distance.

Compact Speedcar heat winners were Mathers, Stewart, Usher and Mitchell Rooke, while Kirsty Kelly was another to crash heavily in her category debut.

Wins in the Modlite heats were shared between Chris Crowe, Sean Butcher and Australian champ Aaron Prosser, but with none of this trio going the distance in the feature it was Scott Lehfeldt who prevailed over Will Butler, Brad Dawson and Wayne Donaldson, with Nathan Politch the fifth and final finisher.

Following heat wins to David Tookey, Bernie Wright and Thomas Hunter, it was the latter who triumphed in the Ford vs Holden vs Sigma feature race. Wright and filled the minor placings, followed by Mickey Mitchell and Brian Knight.