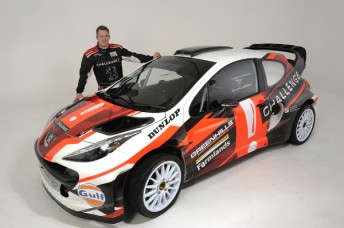 Boasting a naturally-aspirated 3.5 litre V6 engine made in France, the car dubbed the “Mad Creation 2” (MC2) because of its ‘mental nature’ has been an incredibly long process for Kelsey with thousands of hours of work poured into the mammoth project, but he says finally being able to drive it makes it all worth it.

“This car has been such a huge part of my life for so long, so to finally have it finished is just beyond words. All I was thinking when I first drove it was, ‘yahoo! It works!’ but I always knew it was going to work; it was just a matter of when it was going to happen really,” said Kelsey.

In an interesting twist, the MC2 has been built largely at Kelsey’s home workshop in the small town of Coromandel, with occasional visits to external workshops to ensure both the strict Government and motorsport regulations were met.

The team says building this car at home also makes it quite different from the rest of the rally cars out there, because from the outset they endeavoured to make this car something special and totally unique. Kelsey says thanks to a few friends like Dan Slater who did some of the fabrication work, and Bryan Hayton, they’ve been able to achieve exactly that.

“We’ve had so many doubters with this project but we’ve finally done it. I guess people simply don’t understand the project; it didn’t roll off the assembly line as a car to drive down the motorway only to be modified to compete in rallies. From the start, this car was purpose built and designed by me specifically for rally events.”

Everything from the chassis, to the engine, the wheels and suspension, has been specially designed to fit into the completely custom car, and Kelsey says all of the varying components on the MC2 have a unique story, particularly because of the extensive amount of research involved in the process.

“Every single part on this car has such a massive process behind it. I’ve discussed every component with experts from around the world and we’ve made it work. For example, the engine came from France, while the wheels came from Ford World Rally Team because they were about to become obsolete.

“Then there are the brakes; they were initially designed for Subaru World Rally Team, but because they pulled out of the championship, no one had any use for them. That meant I was able to design the hub myself specifically for those brakes. So every part on this car has been used because of its ‘bang-for-ya-buck’ quality, meaning costs have been cut right down.”

Further features of the MC2 are the Sadev 6-speed sequential gearbox featuring a home-made paddle shift system alongside Kelsey’s self-designed home-made shocks and suspension, which all performed faultlessly in the MC2’s first gravel test on the weekend.

“Initial testing of the MC2 has been very successful. It has gone amazing straight out of the box and the handling really suits the New Zealand roads, I think. I just can’t wait to actually go rallying in it now!” said Kelsey.

Kelsey’s first rally event in the MC2 will be at Rally Hawkes Bay next month, an event the youngster has never competed in before which features as part of the Rally Xtreme series, but he’ll be joined by experienced co-driver Malcolm Peden who has vast experience on roads around New Zealand, including Hawkes Bay.

The Kelsey Racing team are also excited to see the reaction from rally spectators and fans, after initial public feedback suggests that the MC2 will be a highly popular car with fans, especially with those in the Coromandel region.

With Rally New Zealand organisers confirming a rally event in the Coromandel region to be held in August, Kelsey says the local support of both his MC2 project, and the upcoming Coromandel rally has been incredible.

“The people around Coromandel have been absolutely amazing. When I drove the car for the first time on the road, people specifically came to see what the noise was all about. And whenever I go to town now, people always ask me where the best spots to watch the rally will be and stuff like that. I can’t wait to show people here what the MC2 can do on a closed road,” explained Kelsey.

“I also wanted this car to be a car that people wanted to get out of bed in the morning to watch which I think I’ve done. But to do that I knew it would have to sound unreal and be cool to look at, so that’s always what I’ve set out to do. At the end of the day, we’re in the game of entertainment, and without that entertainment, you don’t have fans, which means you wouldn’t get sponsors due to lack of exposure and that ultimately means no sport.”