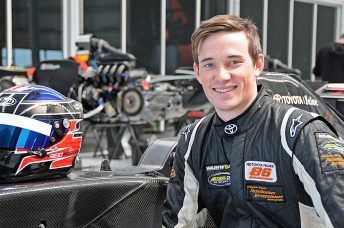 Albany’s Reid Harker is ‘hugely’ excited by the prospect of stepping up to the single-seater Castrol Toyota Racing Series in January.

Harker has been a front-runner in the Toyota 86 Championship in recent years and finished second in that series this year. Now, he says, it is time to test his skill in New Zealand’s premier single-seater championship. With something of a ‘name’ as a single-make racer, he is the first driver to step directly from the one-make 86 sports coupe series into TRS.

“I enjoy the high level of competition single-make racing offers and the Toyota Racing Series is a great opportunity to compete amongst the best up and coming drivers. The Toyota Racing Series has proved to be the breeding ground for successful Kiwis who have gone on to become stars of the sport and I strongly believe this is the next best step to grow as a driver before heading overseas.”

Harker has driven the Toyota FT 50 single-seater race car used by the championship and says he was pleased by how quickly he adjusted.

The car was a ‘revelation’.

“We were given the opportunity to drive the car a little while back thanks to Toyota Racing NZ, when we were still weighing our options for 2018. The cars are amazing to drive, the grip provided by the aero was an eye opener as this was my first taste of a wings and slicks car and I can’t wait to get back in the seat. We are currently working on a testing program leading up to the series in the FT40 [earlier-model TRS car] which will be important if we are to start strong,” he said.

As a further preparation for TRS, Harker took the opportunity to hone his race skills in a last run in his trusty #4 Toyota TR 86. In early November, he contested the opening round of the 2017-2018 Toyota 86 Championship in front of the 104,000 crowd at the ITM V8 Supercars sprints at Pukekohe.

Harker will contest TRS with the respected Giles Motorsport team and says his plans for 2018 after the Championship are still to be confirmed.

The 2018 Castrol Toyota Racing Series is five weekends of intense competition, a total of fifteen races for some of the most prestigious trophies in New Zealand motorsport. It starts at Ruapuna near Christchurch on January 13.