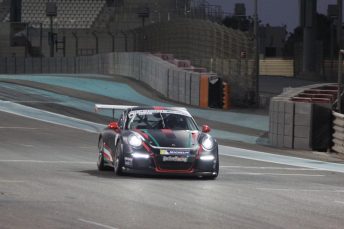 MEDIA RELEASE: Porsche GT3 Cup Challenge Middle East driver Al Faisal Al Zubair started the second half of the 2016/2017 campaign with more seemingly obligatory silverware during round seven at Yas Marina in Abu Dhabi on Friday, 10th February, with victory in both the GCC Rookie Class and Silver Class.

Beginning the weekend with a stunning top three overall performance in qualifying earlier in the day on the full Grand Prix configuration at the United Arab Emirates track, the 18-year-old Omani had to settle for sixth position in the race itself but class success was his prime focus.

Increasing his points lead in the GCC Rookie and Silver Class standings, with his fifth and third wins of the season so far respectively, Al Faisal goes into round eight at Yas Marina determined to put even more distance between himself and his title rivals.

“It was a good day in terms of the result in the GCC Rookie Class and the Silver Class, although I am disappointed with sixth overall as I felt we had the pace for more”, said the 18-year-old, “The main thing is to keep pushing and trying to take as many class wins as possible. We did that in race one, so now the goal is to do the same again in race two and, hopefully, get closer to the overall podium.”

Starting off with the sixth quickest time in free practice, Al Faisal went on to qualify a magnificent third fastest overall for round seven and, in doing so, comfortably secured pole position in the GCC Rookie Class and Silver Class.

Maintaining his position at the head of both classes when the encounter got underway, as the sun started to set over Yas Marina on Friday evening, the Omani was edged back to fifth place overall on the opening lap where he then stayed for the bulk of the 12 lap contest.

As the race reached mid-distance, Al Faisal had closed to within just 0.3 seconds of ‘Gold’ graded driver Dylan Pereira as the battle over fourth position intensified. While the Porsche rookie remained in touch with Pereira, Tom Oliphant joined in the battle during the second half of the race and went on to sneak past Al Faisal with a couple of laps to run as the trio ran almost nose to tail.

Ultimately taking the chequered flag in sixth position overall, Al Faisal was still delighted to celebrate yet another Silver Class victory and also a clear win in the GCC Rookie Class to further cement his position as the true pace setter in each category.

Qualifying for round eight of the Porsche GT3 Cup Challenge Middle East at Yas Marina is set to get underway at 11.15 (local time) today, Saturday, 11th February, with the race itself scheduled to follow at approximately 15.15 (local time).