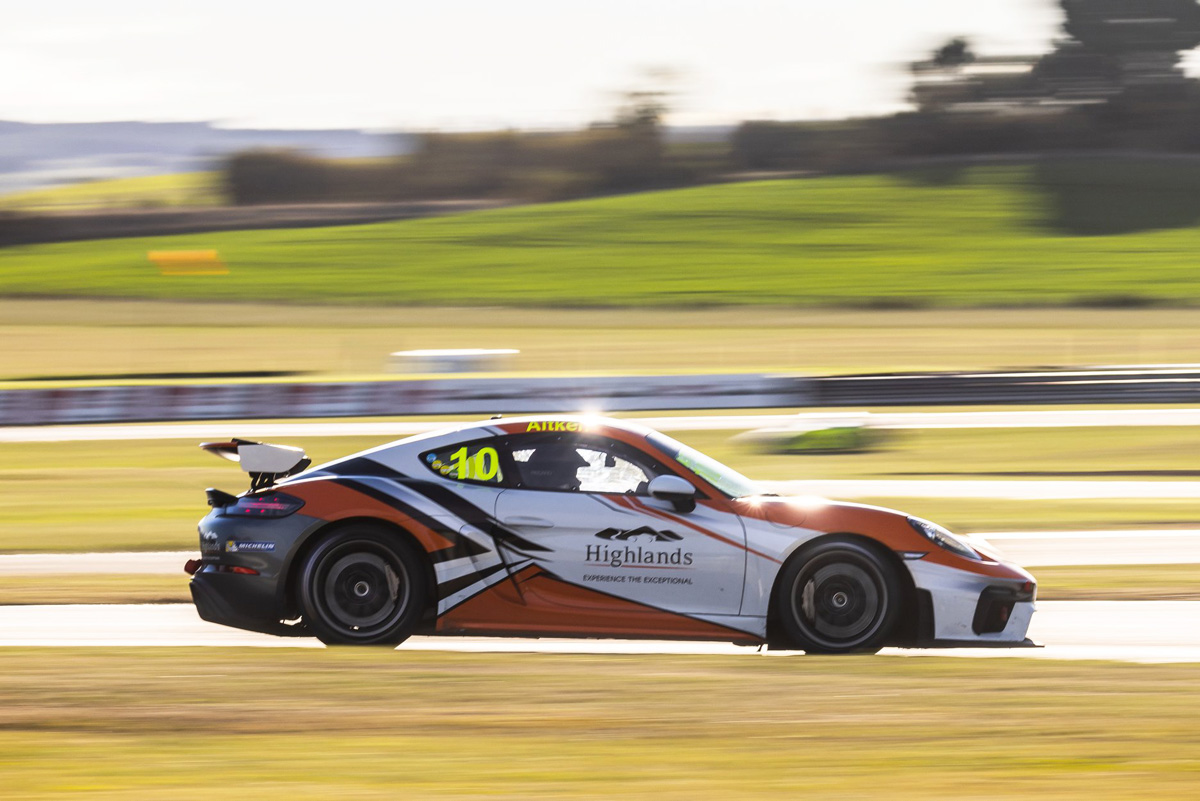 The GT4 class podium was rounded out with Stephen Harrison in his Aston Martin coming second, with the Ginetta of Allan Sargeant in third.

In Porsche, behind Kelly was Martin Neill in second, with Sean Kirkpatrick and James Webb in third.

Heading into the final race of the season, both GT4 and Porsche class titles would be titles, with tight battles at the top of the table.
In GT4, Nigel Cromie led the class on 468 points, with Stephen Harrison only eight points behind on 460.

In the Porsche class, three drivers were eligible to take the win. Martin Dippie leading on 418 points, Rob Steele in second on 402, with Paul Kelly third on 355.

The start of the one-hour feature saw Kirkpatrick/Webb Porsche starting from pole in the Porsche Class with Steele alongside. In GT4, Wayne Leach was the leading GT4 contender, followed by Jono McFarlane and Nigel Cromie.

Off the start, Paul Kelly quickly demonstrated his prowess, putting his Porsche into the lead, passing Kirkpatrick at the end of the back straight.

Connor Adam slotting himself into second spot, by the end of lap two.
As the rest of the field jostled for position and settled into a running order over the opening laps, there was an early stop for the Rob Steele/Paul Southam Porsche, which had to pit for a flat tyre – The car re-joining a number of laps down and essentially taking Steele out of title contention.

A heart-stopping moment for Dippie on lap 12, a brief tangle with the Fitzpatrick Porsche which was sent off into the gravel – and able to rejoin.

With the pitstop cycles complete, the overall race leader with Grant Aitken in his Porsche Cayman GT4. There was a see-saw battle behind with GT4 title contenders Harrison and Cromie a handful of spots behind. Harrison leading, with Cromie trying to stay close enough to maintain his points gap.

There was further heartbreak for race one and two winner, Connor Adam, who retired on lap 24 with another mechanical failure on his Porsche.

With the chequered flag falling after an hour of racing, the finishing order saw Aitken cross the line in first to win in GT4 also grabbing his first win of the season, and Kelly not far behind on the road, to grab the top spot in Porsche class.

“I never thought a low powered GT4 car would get to the front of the field! Couldn’t believe it! My clock in the car stopped, so I had no idea of the time,” said Aitken post-race.
“The last ten minutes of the race, there was no one in my mirror, I thought there must be something wrong, I couldn’t believe it.”

“It’s fantastic – It’s been a long time between drinks since I’ve won a significant championship race.”

For Kelly, it was pleasing to grab a feature race win, with consistent race pace throughout the one-hour affair.

“Tough luck for Connor out there, he’d been fast all weekend. For me, I just looked after the tyre all day. The car was actually really easy to drive. Was really enjoyable,” said Kelly.

Further down the order, Stephen Harrison’s second placing in GT4 gave him enough points to overtake Cromie in the series points, with the McLaren driver finishing two spots further back in fourth.

“Great credit to the Race Lab team, for putting me out there and getting me to the end of the race. It’s been a great weekend, great to round it off with a series win,” said Harrison.
In the Porsche class, Martin Dippie was the series winner, his fourth place, and Steele finishing behind saw him hold the lead and grab the season win.

“It was crazy, on Friday, I had no idea what I was doing, having never raced here before – it’s a tough track, very technical.

“Today the car was hooked up, and I knew the championship was on the line.
“It’s been a fantastic season, great racing, and great people, and great to see all of these fantastic cars together on track.”