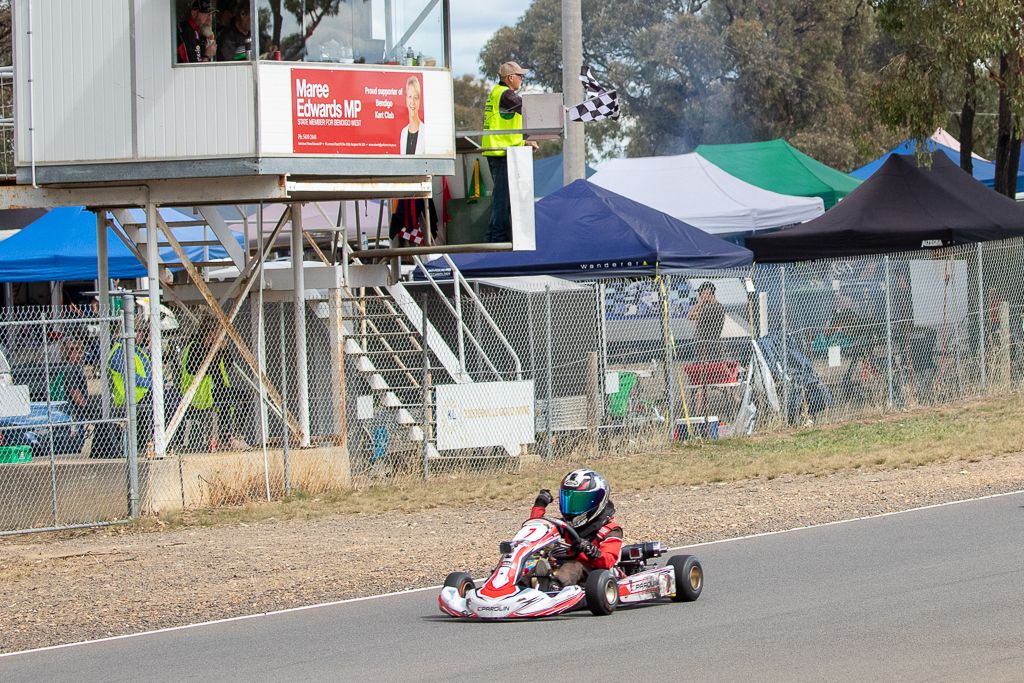 Aiden Schweikert took home a strong top ten at the opening round of the Golden Power Series in February. The young driver was back racing over the weekend at the Bendigo Kart Club for the second round of the series. With a field of near twenty drivers in the strong Cadet 12 field, Schweikert had himself in for a tough weekend of racing. After running in the top three of both practice sessions, Aiden was hoping to chase for pole position!

The eighteen driver field hit the track for qualifying and Schweikert was looking to get as far up the grid as possible. The Link Airways backed entry put himself immediately in the front group and had his Parolin kart in the window. Aiden put in a stellar lap late in the session to put himself to the top of the time sheets. Schweikert and team waited nervously to see if anyone could take pole position off him. Aiden was able to hold on and take his maiden pole position and have him off position one for the opening two heats.

Schweikert was off pole position for the first time in his open career and had a hectic start to his opening heat dropping back to third off the opening lap. The Jeremy Cross Physiotherapy backed entry was able to jump back into second spot in the middle stages and chase after the race leader. In an awesome fight back, Aiden was able to set the fastest lap of the race and make a move for the lead on the final lap to cross the line first! Unfortunately, Schweikert was handed a starting infringement, stripping him of victory and classifying himself in position ten.

Heat two the team were hoping to turn around the misfortune of heat one but an incident on the opening lap put Schweikert outside of the top five. The Haley Hire entry dropped as low as seventh before regrouping and trying to make his way back through the field. Aiden pushed hard and made his way back inside the top five drivers. Showing excellent pace and matching that of the leaders the young driver crossed the line in position five overall. This had him starting out of position nine for heat three with plenty of work to do on Sunday.

Schweikert got his best start of the weekend jumping up to sixth on the opening lap of the race and looking to keep moving forward. The G & L Motor Repairs and Performance backed entry was showing excellent pace and moved his way into the top five of the field. Aiden had made his way into position four by mid race and was now chasing after the top three drivers. In another excellent performance driver and race pace wise, Schweikert came home in position four and was looking to have a strong result in the final.

Aiden had moved up to position five to start the fifteen lap final and had a smooth and consistent start. By lap four the Link Airways backed entry had moved into the top three and looked a strong chance for victory. Schweikert moved into second on lap seven and with five to go took the lead from round one winner Jack Jenkins. In a frantic and fascinating final five laps both drivers had multiple lead moves. In a nail biting finish, Aiden was able to hold on and take his maiden Golden Power Series round win. His father Justin spoke post weekend of his sons first open meeting win. “I’m so proud and happy for Aiden. He was one of the fastest in every session and didn’t let the set back of the first heat ruin his weekend. He drove with measured aggression and held his ground. It was brilliant. Hopefully unlocking everything we’ve thought he was capable of”. Schweikert will be back on track at the second round of the Australian Kart Championship at the Southern Go Kart Club.