Aidan to make European debut in Germany this weekend

Aidan to make European debut in Germany this weekend 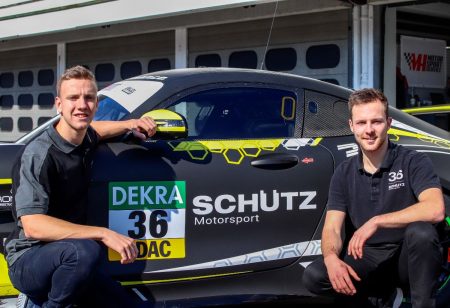 Having traded single-seaters for sports cars at the end of 2016, Aidan Read embarks on a new venture into Europe with the ADAC GT Masters, that begins this weekend in Oschersleben.

With 62 drivers in total, all from varying backgrounds, Aidan is the only Australian driver on the grid. The Mechanical Engineering student will be combining the year’s racing alongside his study back home in Perth. Over the weeks he has been busy preparing in the hopes of achieving strong results early on.

After his first test with Schütz Motorsport at the beginning of March [at Circuit Castelloli and Circuit de Catalunya, both in Spain], he went to the first official test on 8 April, followed by an outing in the DMV Dunlop 60.

GT Masters spans across four countries in Europe [Germany, the Czech Republic, Austria and the Netherlands] with seven rounds in total. Schütz Motorsport were absent from the series last season, but return this year with Aidan and Marvin Dienst, running a Mercedes AMG GT3 which lines up alongside seven other manufacturers present in the championship.

“The competition is going to be top level and I’m really interested to see how we go in the field,” said Read, “That’s what excites me and motivates me the most, is where we can perform and who we can benchmark ourselves against because it’ll be strong field.

“We will be up against the factory teams and drivers, which I see as an important benchmark. Our goal is to show our best amongst a classy field of GT3’s. I think that a great team environment and strong surprise package is coming together at Schütz Motorsport.

“I expect it to be very high intensity and very cut throat. I also expect it to be a challenge to learn all new tracks but I think this is all going to be a really good test of my abilities, to compete at a top level in GT3 and to see how far my teammate and I can take our car and where we can place ourselves.”