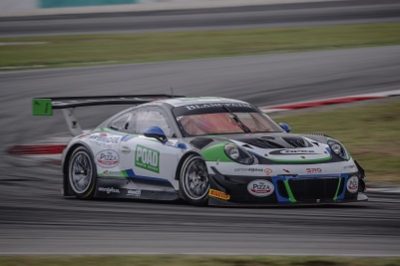 Having got to grips with GT3 machinery last year in what was his first season of Blancpain GT Series Asia, Aidan Read is now looking forward to 2018 as he teams up with the highly experienced Darryl O’Young at Craft-Bamboo Racing.

The 2018 campaign gets underway this coming weekend (April 14-15) at Sepang International Circuit in Malaysia, a circuit that is very familiar the young Australian racer, as he competes in the #991 Porsche 911 GT3 R, in what he and the team expect to be a race-winning package.

Aidan has been busy with a pre-season test programme, including working with Porsche factory driver and Le Mans winner Earl Bamber last month at the Sepang circuit where he and the New Zealander worked through updates to the GT3.

Now Aidan, who enjoys backing from Prosperity Investment Management, is looking forward to the challenge with Craft-Bamboo Racing and aims to build on his string of strong results late last year to mount a challenge for the Silver class championship in 2018.

“The level of preparation has been high for the 2018 Blancpain Asia season,” Aidan said. “I’ve been driving regularly in GT3s at Sepang, coaching in a variety of cars, and training as part of my normal routine. It all makes the difference and I’m now approaching this season with more certainty than ever before.

“I expect that Darryl and I will mount a championship challenge this year,” Aidan continued. “It’s never easy but the key for this weekend will be bagging strong points early and setting a standard. I made my first Blancpain Asia podium last time out in Zhejiang, so everything is in order go further this year.”